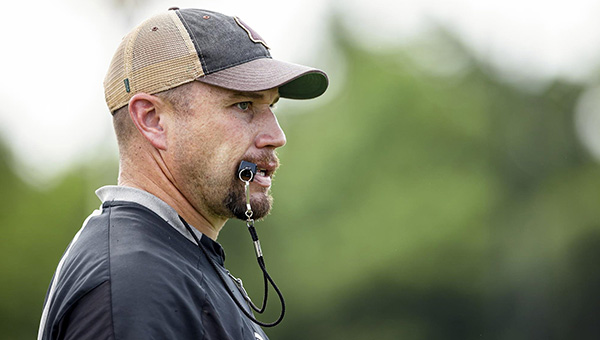 The university announced Thursday that it has promoted defensive coordinator Zach Arnett to replace Leach, who died suddenly of a heart condition earlier this week.

Arnett had been named the interim coach after Leach fell ill Sunday, and will now have the job on a full-time basis. He agreed to a four-year contract — the maximum length allowed under Mississippi’s state law — that will pay $3 million annually, plus performance-based incentives.

In a statement, MSU President Mark E. Keenum said hiring Arnett brought stability to the program during a difficult time. In addition to preparing for the Bulldogs’ bowl game, the December signing period begins next week.

“Our football program has dealt with a stunning blow at the untimely passing of Coach Mike Leach,” Keenum said. “It is imperative that we bring stability and continuity to our team and our coaching staff as we move forward from this tragic event. I have tremendous confidence in Zach Arnett’s leadership and believe he is uniquely positioned to continue the progress Coach Leach brought to our program. He brings great drive and intensity to the task.”

Leach, 61, died Monday night at University of Mississippi Medical Center in Jackson, after falling gravely ill Sunday at his home in Starkville.

Mississippi State has scheduled a memorial service to celebrate Leach on Dec. 20 at 1 p.m., at Humphrey Arena on campus. The event will be open to the public. The memorial service will be streamed live on WatchESPN.com.

Arnett was put in charge of the team by Mississippi State officials in Leach’s absence. With the early signing period a week away and the transfer portal active, Mississippi State was motivated to move quickly to put a new coach in place. The Bulldogs also play Illinois in the Reliaquest Bowl in Tampa, Florida, on Jan. 2.

“I’m honored that Bracky Brett and Dr. Keenum have the faith in me to lead our program,” Arnett said. “This is an extremely challenging time for both me and everyone associated with Mississippi State football. No one can ever replace Coach Leach and the impact he had on MSU and all of college football. This team is full of strong, resilient young men and we are committed to continuing to build on the foundation Coach Leach laid and continue to honor his legacy.”

Arnett has been Leach’s defensive coordinator since he took the head coaching job at Mississippi State in 2020. Arnett’s defense ranked in the top five of the SEC in his three seasons in total defense, rushing defense and takeaways. They were fifth in total defense this season.

Arnett is a native of Albuquerque, New Mexico, who played linebacker for the University of New Mexico from 2005-08 under coach Rocky Long.

His coaching career began under Long, too, at San Diego State. He spent nine seasons with the Aztecs, rising to defensive coordinator in 2018 and leading some of the top defenses in the Mountain West before joining Leach’s staff.

Arnett being elevated makes him the eighth former Leach assistant to be a head coach currently in major college football.