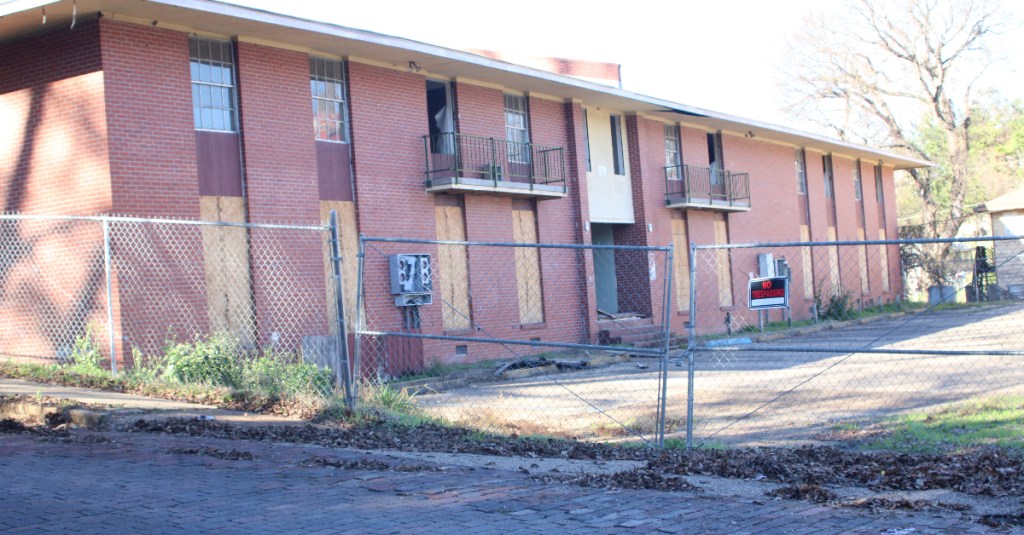 A “'No Trespassing” sign hangs on the gate and boards cover broken windows at the South Street Apartments, 1201 South St. The apartment complex, which has been deteriorating, has been sold to a Jackson company. (Photo by John Surratt | The Vicksburg Post)

A Jackson company has acquired the South Street Apartments, which has been a thorn in the side of city officials and the residents living around it for at least 10 years.

According to records on file at the Warren County Chancery Clerk’s office, Peach Tree Financial LLC acquired the property at 1201 South St. on Aug. 30 from Washington Apartment Homes LLC. Peach Tree representative John Hunter declined to comment on the sale, citing concerns of other partners involved in the acquisition.

Ward 1 Alderman Michael Mayfield said Thursday he has met with representatives of Peach Tree about the apartments, which are in his ward.

“They showed me some plans and are supposed to put some on my desk within the next week or so,” Mayfield said. “I was very impressed with what I saw. It seems like they’re ready to roll. It seems like we’re going to be all right here.”

Mayfield said he stressed the importance of getting the apartments renovated “and put back in service, or they need to be taken down.

“I haven’t strayed from that (opinion) and I still don’t stray from that; it’s time to act,” he added. “I pray they can get it together and let’s do this.”

Peach Tree Financial is the third company to own the property since it was closed by the city.

Also known as the Triple Six Apartments, the 41-unit South Street Apartments complex is located between South and Locust streets in Vicksburg.

The city in June 2012 closed 14 of the apartments because of their condition and later condemned the rest of the complex, putting it under the city’s slum clearance ordinance, which allowed the city to take control of the property, demolish it and put it up for sale to recover its costs.

Since it has been vacant, the apartment buildings have deteriorated. The apartments have been vandalized for copper pipe and wiring and used by vagrants as a place to sleep or get out of the weather. Doors have been removed, windows broken and vegetation is beginning to take over some areas.

In 2014, the apartment complex was bought by Holly Springs lawyer Kent Smith, who intended to refurbish the apartments. Smith put a fence around the building, but it failed to keep transients and other homeless people from getting into the buildings.

Smith was unable to begin refurbishing the apartments and in 2016 he donated the complex to Habitat for Humanity with the provision that whatever happens to the property, it must enhance the city, the South Street neighborhood and the city’s downtown district.