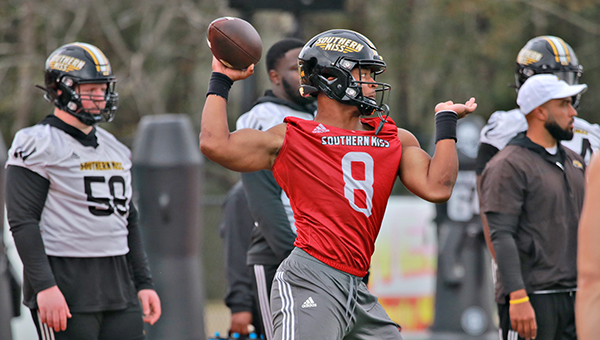 MOBILE — When Will Hall took over the Southern Miss football program, a major goal was getting the Golden Eagles back to the postseason.

That goes from a goal to an achievement on Saturday, when Southern Miss (6-6) renews its rivalry with former conference rival Rice (5-7) at the Lending Tree Bowl in Mobile, Alabama.

It’s only been two years without a bowl game for Southern Miss, but after going 6-16 in those two seasons getting back to this point feels like a much bigger milestone.

“It has been a great experience all week long and everyone affiliated with the bowl has been first class and have been right there to help at any time we needed anything,” said Hall, who was hired as Southern Miss’ coach in 2020. “It really has been an awesome experience and we are excited to play in the game and to get Southern Miss back to the postseason. This is a big deal for us.”

Rice has had a much longer bowl drought. This is its first appearance since 2014, when it beat Fresno State in the Hawaii Bowl. That was also the last time the Owls had a winning record.

Considering their lack of recent success, this low-key match-up on the opening weekend of bowl season carries a little more weight for the two participants than it would seem on the surface.

“It’s especially meaningful since Rice has not been bowling since 2014 and when we practiced last week, I could tell how much this game means to our team,” Rice coach Mike Bloomgren said when the matchup was announced earlier this month. “Our seniors have a chance to represent Rice one more time and earn the right to be called bowl champions and our underclassmen can take another step in the building of this program.”

Southern Miss and Rice played each other 12 times in 15 seasons between 2007 and 2021, when both were members of Conference USA.

Southern Miss moved to the Sun Belt Conference this season, however, while Rice remained in C-USA.
Hall downplayed the oddity of playing a longtime conference foe.

“Initially, I’m just proud to be in the bowl season. This has been a tough build here,” Hall said. “It’s not been easy with what we’ve inherited and the stuff we’ve been through to get it back, but now we have laid a great foundation. We feel like it’s a really good foundation we can build a really great program off of.”

Although Rice has seven losses — including a three-game losing streak to end the regular season — Hall noted that they were a bit better than that record might indicate. Three losses were by seven points or less.

Southern Miss has also lost three games by a touchdown or less.

Hall said Rice also uses a unique offensive approach that makes them difficult to deal with. The Owls rank 10th out of 11 teams in Conference USA in total offense, but are second in time of possession at nearly 33 minutes per game.

“What they do offensively is so unique and different than what you see every day now,” Hall said. “They really can control the clock with all the shifting and motioning and the way they gain leverage in the run game. They are extremely physical and if they get two or three third downs on you on a drive, you can look up and the whole quarter is gone.”

The Golden Eagles will also try to grind the clock with Frank Gore Jr., who is the school’s first running back to go over 1,000 yards in a season since 2017. He has 1,053 yards and seven touchdowns.

After rotating a string of quarterbacks, USM’s wheel has landed on Trey Lowe. The redshirt junior will make his fourth start this season, having thrown for 795 yards, three TDs and two interceptions.