Sanders aims to go out a winner with Jackson State 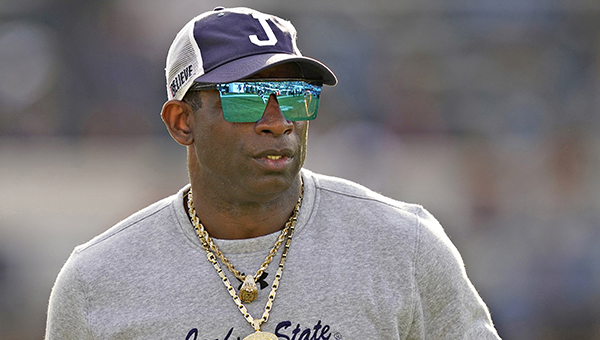 Deion Sanders will coach his final game with Jackson State on Saturday, against North Carolina Central in the Celebration Bowl. Sanders is leaving JSU to become the head coach at Colorado. (AP Photo/Rogelio V. Solis)

ATLANTA (AP) — It goes without saying that Deion Sanders is eager to win his last game with Jackson State.

The Tigers (12-0) aim to beat North Carolina Central (9-2) in the Celebration Bowl on Saturday to cap an unbeaten season and win the HBCU national championship. Sanders will then turn his focus to Colorado, the next stop on his coaching journey, where he will hit the recruiting trail as soon as time allows.

The 55-year-old Sanders will take charge of a program that’s had just one winning season since 2005 and last signed a four-star prospect in 2020. The Pac-12 Buffaloes went 1-11 this year, and most of the games weren’t close, with 10 losses coming by at least 23 points.

But at least for the next 24 hours, Sanders’ focus is solely on Jackson State, a program that coach “Prime,” as he likes to be called, built into a powerhouse among historically Black colleges and universities. The Tigers went 27-5 under his watch and Sanders was twice named the Southwestern Athletic Conference coach of the year.

Sanders thanked the athletic directors at Colorado and Jackson State for allowing him to finish what he started.

“We always talk about finishing and then sometimes as adults we have the audacity to leave prematurely,” he said Friday. “I wanted to finish, and my kids wanted me to finish and yet some fools say he should go. Well, if I go, don’t you think my son going, too? You might want to consider that. Like I’m going to go and leave my son.”

Sanders has two sons that play for Jackson State, quarterback Shedeur Sanders and cornerback Shilo Sanders. They are a big part of a team that beat Southern 43-24 on Dec. 3 to win the SWAC championship for the second straight year.

Shedeur Sanders said the Tigers are eager to make up for last year’s embarrassment in the Celebration Bowl, when they lost 31-10 to South Carolina State. He is coming off an exceptional season with 3,396 yards passing, 36 touchdowns and six interceptions.

“It’s a whole new team,” he said. “Last year is just motivation. You can’t enjoy the moment if you don’t win. We’re all one family. We understand what’s at stake.”

Deion Sanders hand-picked his successor at Jackson State, T.C. Taylor, to take charge of the program after he leaves. Taylor, who has been Jackson State’s wide receivers coach since 2019, was introduced as its new head coach this week.

Sanders said his fondest memory of his time at Jackson State was after he was released from the hospital last year and the team rallied to win. Sanders had been hospitalized for 23 days and underwent surgery eight times to save his left leg. He had two toes amputated and walks with a limp.

He nearly choked up recalling that game.

“My most proudest memory was coming out of the hospital,” Sanders said. “Being carried by some of these men that are in here today because I couldn’t walk. Because my son Shedeur had told me, I need you. I think we were playing Southern last year. It was cold, but I told my son I’d be there and I made it. Weak and frail as ever. Probably 30 pounds down. Cold. And the game wasn’t going our way, but I knew we were going to win.

“I never flinch, and he brought us back. And then Shilo had the game-clinching interception. And I looked at the scoreboard and we had 21 (his old jersey NFL jersey number) points. That was just a God moment.”

Sanders hopes Jackson State will electrify the crowd at Mercedes-Benz Stadium, not far from where he starred in the Georgia Dome for the Atlanta Falcons. The Pro Football Hall of Fame inductee played for the Falcons and Atlanta Braves simultaneously in the early ’90s and helped the Braves advance to the 1992 World Series. He was on Super Bowl-winning teams with San Francisco and Dallas.

“There’s no pressure,” he said. “This is fun. This is a game. Someone wins, someone loses. Pressure is what happens when the doctor tells you you’re only going to live five or six days. That single mother that can’t make it because the bills just don’t add up, that’s pressure. It’s a game, and we play to win.”