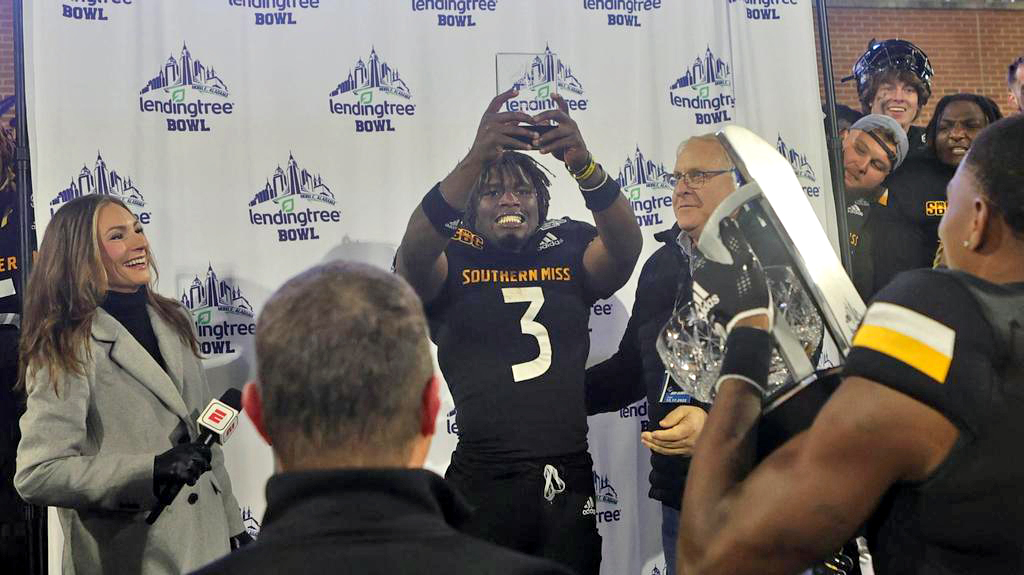 Southern Miss running back Frank Gore Jr. (3) celebrates with the trophy after leading the Golden Eagles to a 38-24 victory over Rice in the Lending Tree Bowl on Saturday. Gore set an NCAA bowl game record with 329 rushing yards, and also ran for two touchdowns. (Joe Harper/BGNPhoto.com/Southern Miss Athletics)

It was a fitting compliment for a special kind of performance.

Gore ran for an NCAA bowl-record 329 yards and accounted for three touchdowns to help Southern Miss hold off Rice 38-24.

Gore, the son of the former NFL star, had a 64-yard scoring run in the second quarter, threw an 18-yard touchdown pass in the third and ran for 55 yards for another score in the fourth. He also ran 59 yards to set up the go-ahead touchdown for the Golden Eagles (7-6).

Gore, who had 21 carries, broke the mark of 317 yards set by Appalachian State’s Camerun Peoples in the 2020 Myrtle Beach Bowl against North Texas. Gore also broke the Southern Miss record of 304 yards by Sam Dejarnette against Florida State in 1982.

“He’s always intense and competitive and I’m just really proud he was able to have a performance like this on a national stage where a lot of people could see it,” Hall continued. “He’s got a chip on his shoulder like his short coach does.”

Rice quarterback AJ Padgett threw for 295 yards and three touchdowns — all in the third quarter — to give the Owls (5-8) a brief 24-17 lead.

Padgett threw 26 and 32 yards to Isaiah Esdale to tie a game Southern Miss led 17-3 at halftime, then connected with Bradley Rozner to put Rice up 24-17 with 5:06 left in the third.

Gore’s 18-yard touchdown pass to Ty Mims — his seventh passing score of the season — tied it at 24 after three quarters.

Trey Lowe threw a 26-yard touchdown to Jason Brownlee on the second play of the fourth quarter to give the Golden Eagles the lead at 31-24, and Gore’s 55-yarder capped the scoring with 2:57 left.

“We did a lot of good things in that third quarter, but you have to take your hat off to Southern Miss that they were able to run the ball the way they did,” Rice coach Mike Bloomgren said. “It was kind of the Frank Gore show. But we knew what kind of back Frank Gore Jr. is, what a great back, what a great runner he is. Tonight he was phenomenal. We didn’t do a good enough job tackling, and we didn’t make enough plays on offense to win the game.”

Gore said his father was at the game, and met him on the field prior to the trophy presentation. Frank Gore Sr.’s career-best rushing total in a 16-year NFL career was 212 yards for the San Francisco 49ers against Seattle in 2006.

The elder Gore ranks third all-time in the NFL in career rushing yardage.

“I told him (about the record) when he came on the field and let him know that I’m the best in the family,” the younger Gore said. “Thanks to my O-line, they opened up a lot of good holes and got me into the secondary. As Coach (Hall) said, the first person could rarely tackle me. And if you’re able to get down the field untouched, that leads to a lot of big plays.”