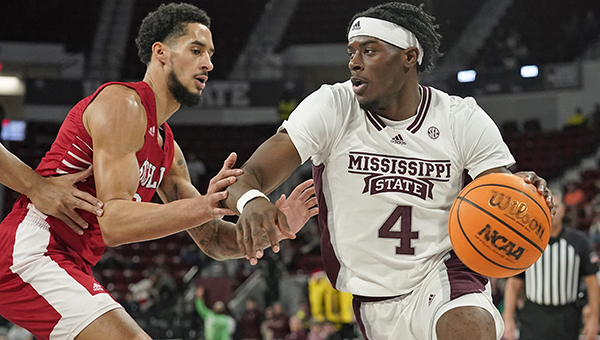 Davis added 14 points and six assists for the Bulldogs (11-0), who are off to their best start since the 2003-04 season. Tyler Stevenson added 14 points, including 12 in the first half, for Mississippi State.

“They had our full attention,” Mississippi State men’s basketball coach Chris Jans said. “We watched their game with Texas Tech. They played at Texas Tech and they should have won that game. Four of their five starters are four-year starters and they were not going to be scared or intimidated coming in here. We talked to our guys about it over and over, and (Nicholls State) did that and they were not scared.”

Latrell Jones led Nicholls State (5-6) with 15 points, while Marek Nelson and Micah Thomas each added 12. Pierce Spencer had a steal with two seconds remaining, but his 3-point try at the buzzer bounced in and out of the rim.

Trailing 30-27 at halftime, Mississippi State went on a 20-7 spurt after halftime and led by as many as 12 points in the second half.

“Obviously, our second half out of the gates was great,” Jans said. “Then we just took our foot off the gas. We knew they were going to be aggressive and that is how they play.

“I was disappointed in a lot of different areas, especially defensive rebounding. That has become a key area for us. Then we didn’t play very smart down the stretch. It almost cost us but the good thing is, we can dissect it and try to make sure it doesn’t happen again.”

Mississippi State still appeared to have the game in hand with a 59-51 advantage with 4:16 left in the second half. But the visiting Colonels kept chipping away and cut the deficit to one point on two occasions in the last minute of play. The Bulldogs made 5 of 6 free throw attempts in the final 32.8 seconds to remain perfect.

The Bulldogs shot just 39 percent for the game, including 2-of-14 from 3-point territory. But the Bulldogs held a huge advantage at the free throw line, making 28 of 35 attempts, while Nicholls State was 6-of-9.

“They really came after us hard,” said Stevenson, who was 6-of-7 from the field. “They played hard and they played physical. There were some things we could have done better. But I am just glad we came out with the win.”

Mississippi State is off to its best start since beginning the 2003-04 season with a 13-0 record. The Bulldogs have one more non-conference game before starting SEC play on December 28th against No. 4 Alabama. They play Drake Tuesday at 4 p.m., in a neutral court game Lincoln, Nebraska.