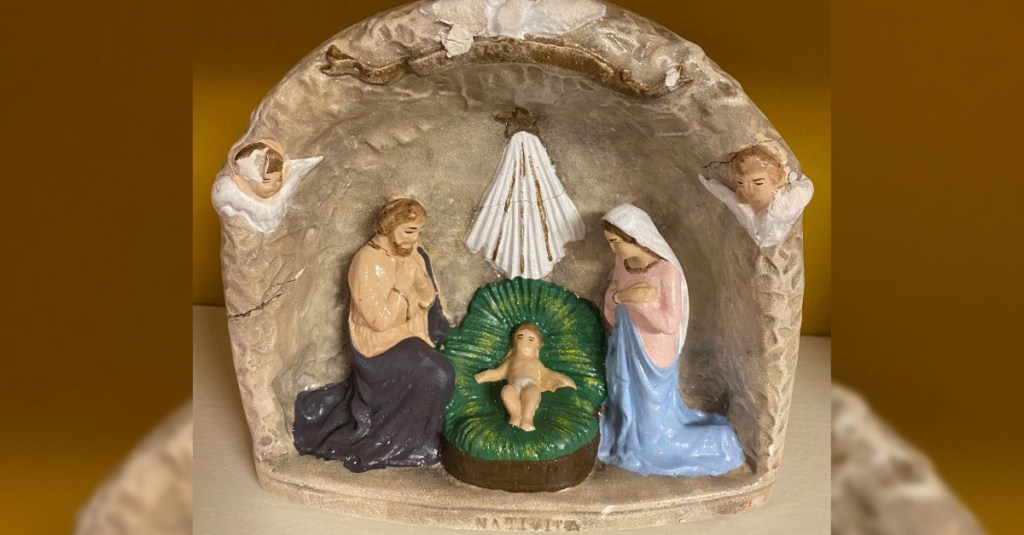 One of Mary Hazel Wiesinger's 575 Nativity scenes, 225 of which are on display through Sunday. (Photo Submitted)

For Mary Hazel Weissinger, every day is Christmas.

Weissinger collects Nativity scenes that depict the birth of Jesus on that first Christmas Day more than 2,000 years ago. It’s a collection that numbers 575 sets she either collected over time or that were given to her by friends and relatives, and every December weekend since 2009, she’s shared part of her collection at Goodman Memorial United Methodist in Cary, where 225 sets are on display to the public.

Weissinger has been collecting nativities “As long as I can remember,” her daughter Maryanne Weissinger Smith said.

The collection began in the late 1950s when Wiesinger asked her brother who was stationed in Germany with the U.S. Army to bring her pieces of the Holy Family for a Hummel Nativity scene. That, Smith said, got her mother started.

“She was a teacher for over 40 years and in the summer, she would travel and everywhere she would travel, instead of bringing back snow globes or whatever souvenirs people brought back, she started buying Nativities. And it grew and grew,” she said.

At first, Smith said, her mother displayed the sets in the house, “Especially when all the kids were gone, and we would set them up on bookcases there, but the collection got so big, there was no place for family when they came in for Christmas so we talked her into displaying it publicly.

“She was rather hesitant for a while; she didn’t know how that would do for other people but she’s embraced it over time and as much work as it takes to put it out, we needed a place where we could put it out for the public and leave it out for a long period of time,” Smith added.

And Goodman Memorial, which has a small congregation, volunteered to hold the display in the church’s fellowship hall.

One presently on display is carved into a ¼-inch cocoa bean.

“She has a set carved from fish bone, one carved from soap; some made from beer bottles and wine bottles, sets made from marble and a flag with the Nativity on it. Another Nativity is on a can of peanuts,” Smith said. “A friend did a puzzle featuring the Nativity that was dry-mounted and framed, and there is a Nativity made of cork; a gift from nieces who found it while traveling in Italy. Another interesting set from the Andes has the Holy Family and the wise men with extremely long necks. It was sent by a relative who served in that area as a missionary priest.”

Mississippi artists are also featured. Weissinger, her daughter said, has a Christmas card from Vicksburg artist Andrew Bucci and Bucci’s personal Nativity scene given to her by Bucci’s niece. There are also ceramic works by Jackson artist Mildred Wolfe and from Red Leaf Pottery in Arcola.

Preparing the Nativities for display, Smith said, “Is very much a family affair.”

Smith, who lives in Louisiana, is one of six children. She has two brothers and a sister who live in Mississippi and a sister living in Virginia. One brother is deceased.

She said family and community volunteers from Cary set up the display the weekend of Thanksgiving. The display is open for viewing beginning the first weekend in December and goes for three weekends. It ends Sunday. Weekend hours are 10 a.m. to 4 p.m. Saturday and 1 to 4 p.m. Sunday with special showings for groups during the week on request and family members or volunteers are at the display to answer questions about the pieces.

“It’s a wonderful collection; there are so many depictions of the Nativity; you can’t imagine. It’s just amazing, all the things and the stories behind how many came to be,” Smith said.