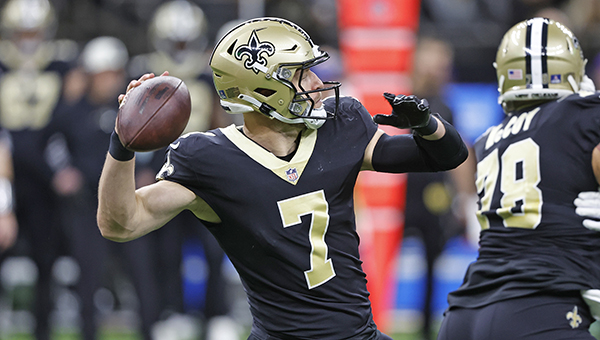 Andy Dalton and Hill combined to throw three touchdown passes to Johnson and Shaheed, and New Orleans beat Atlanta 21-18 on Sunday in the debut of Falcons rookie quarterback Desmond Ridder.

“We’ve got some weapons,” Dalton said.

Johnson, converted from receiver to tight end after being undrafted out of Oregon in 2020, had a career-high 67 yards receiving and caught both of Dalton’s scoring passes. Hill, a utility player who’s listed as a tight end, threw his second touchdown pass of the season on a 68-yard connection with Shaheed, who also was undrafted.

Johnson has a team-high seven receiving touchdowns. He and Shaheed, who has three TDs longer than 40 yards, have taken advantage of opportunities to complement more prominent offensive players like Chris Olave and Alvin Kamara.

“Juwan has done a lot of really good things,” Dalton said. “Both touchdowns were good run-after-catch plays by him. So, I feel like he’s playing with a ton of confidence.”

Dalton drew laughter when he deadpanned that Shaheed, who had no official 40-yard time as a prospect out of Weber State, “runs really fast.”

“We’ve had opportunities to take some deep shots with him and he’s come down with a lot of them,” Dalton added.

New Orleans (5-9) and Atlanta (5-9) remained mathematically alive in the anemic NFC South — a division led by Tampa Bay, which fell to 6-8 after losing 34-23 to Cincinnati. Tampa Bay and Atlanta play each other in Week 18.

Atlanta was down by a field goal and threatening to score with less than three minutes remaining when Ridder hit Drake London over the middle for first-down yardage on fourth-and-5. But safety Justin Evans punched the ball from London’s grasp, and cornerback Bradley Robey snagged it out of the air to give New Orleans the ball on its own 39.

The Saints kept the ball until failing to convert on fourth-and-short in Atlanta territory with 9 seconds left, and the game ended on Ridder’s scramble two plays later.

The Falcons had lost four of their previous five while season-opening QB Marcus Mariota played through what the team has described as a “chronic” knee problem.

So, Atlanta coach Arthur Smith announced this week that he was elevating Ridder to starter and that Mariota would be placed on injured reserve.

Ridder completed 13 of 26 passes for 97 yards without an interception.

“Obviously you are going to have nerves and anxiety just getting out there for your first start in a crazy environment,” Ridder said, adding that he’d grade his performance a C-minus or a D. “We executed in the run game, but obviously I didn’t do too well in the passing game.”

Rookie running back Tyler Allgeier helped the Falcons sustain drives with 139 yards and a touchdown on 17 carries.

“He’s an instinctive player — smart and hard to tackle,” Smith said. “The first guy doesn’t bring him down, and as the game goes on, they don’t like tackling him.”

The Saints led 14-0 after two possessions, scoring first when Johnson turned Dalton’s short pass into a 19-yard TD by spinning through tackle attempts and diving for the goal line.

“I just tried to get freaky,” Johnson said. “You really just got to have the attitude that you can’t be stopped.”

Hill’s deep throw down the middle to Shaheed came on the next series.

The Falcons cut it to 14-3 after stalling inside the New Orleans 10 and closed to 14-10 on Allgeier’s 5-yard run in the third quarter.