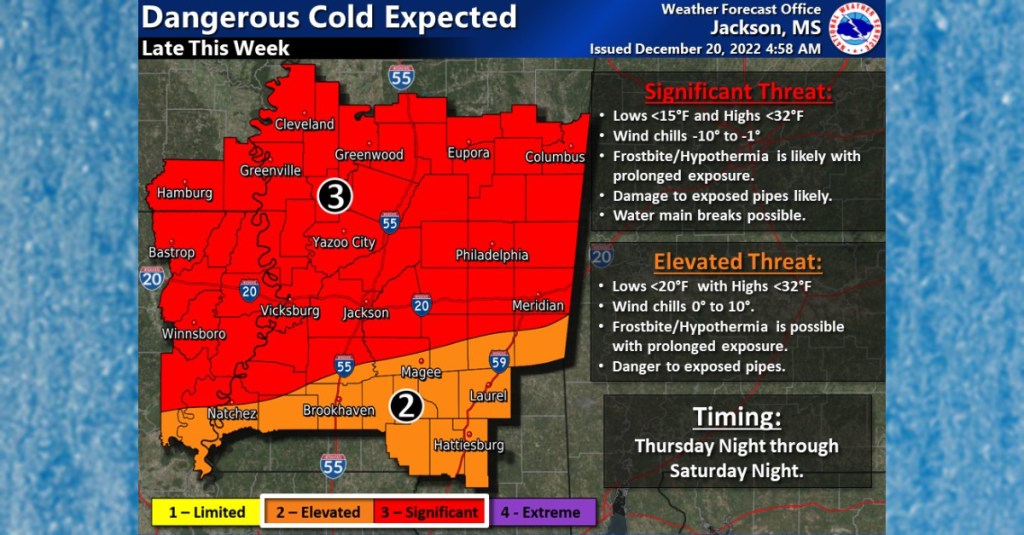 A period of dangerously cold weather is expected from Thursday night through Saturday night for our forecast area. Low temperatures will likely range from the single digits north to teens south, and highs will be near or below freezing for much of the area Friday and Saturday. (NWS Graphic)

While people in the Warren County area can’t expect a white Christmas with blankets of snow, the upcoming holiday weekend will have Jack Frost nipping at their noses.

Thanks to a system that’s moving across the nation, National Weather Service forecaster Kendall Parks said, much of the Southeast will need to take cover through Christmas.

“It’s a disturbance in the polar vortex that’s allowing some colder air to come through to our region,” Parks, who is based in Jackson, said. “We’re expecting some hard freeze warnings.”

The wintry weather will begin Thursday, when temperatures reach a high of 60 degrees and then plummet to a frosty 13 degrees for an overnight low. The high temperature on Friday will remain below freezing at 28 degrees, with a low of 16. Christmas Eve will be a sunny 33 degrees, and Santa Claus will fly into Vicksburg with low temperature of 18.

Christmas Day will rise above freezing with a high of 40 and a low of 22 degrees.

While the NWS has not yet issued a formal wind chill advisory, Parks said, it’s a safe bet that wind chills could be below zero.

“We’ve yet to make a determination in the wind chill advisory. Since it’s going to be so windy, you can expect that will make it feel colder,” he said.

The NWS has placed Warren County under a hard freeze warning, that will go into effect on Dec. 23 at midnight and run through 6 a.m. on Christmas.

However, he warned, conditions aren’t right for snow to come to Southtown this Christmas.

“Since it is going to be so dry, snow won’t have a chance to actually form,” he said. “Since it could be freezing, you’ll see some sleet, which is just precipitation freezing before it hits the ground. But it won’t stick.”

Seeing as the area is forecast to have three nights in a row where temperatures are well below freezing, Elfer said his office encourages residents to follow the “4 Ps.”

“We want to think about the 4 Ps: People, Pipes, Plants and Pets,” Elfer said. “Make sure your neighbors and relatives have adequate heat. Protect your pipes so you don’t have busted pipes and don’t have to go get water. Outdoor pets need shelter.

“And if you have any vegetation that you want to keep alive, keep it inside,” he added.

The Warren County EMA has been in contact with all rural water associations in the area to ensure they are prepared and will be able to contact the county regarding service interruptions due to the weather, Elfer said, and the county’s fire service equipment is in working order and ready to respond in the event of emergencies.

In addition to staying warm, Elfer said, it is important to do so in a safe manner.

One simple step to take is to have working smoke and carbon monoxide detectors in the home.

“People need to be careful and make sure their heat source doesn’t produce carbon monoxide,” he said. “Also, this is not going to be like the ice storm we had, but it’s going to be cold. People do die of hypothermia when it gets cold like this.”

With many residents traveling over the Christmas holidays, Elfer advised simple steps homeowners can take to prevent burst pipes or other cold-related damages.

Before homeowners leave their homes, they need to set their thermostats to a moderate temperature versus turning off their home’s heating system completely. They also need to wrap any outdoor pipes to provide insulation, and open cabinets where sinks are, to allow heat to reach those pipes.

“If it gets really cold, you can always drip the faucets, which allows water to continuously flow through the pipes,” Elfer said.