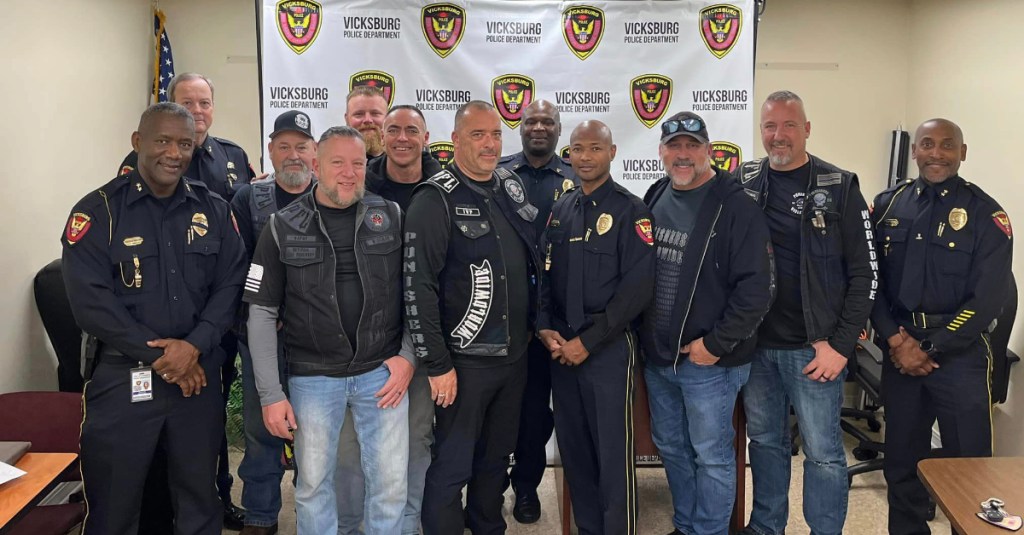 National Officers for the Punishers Law Enforcement Motorcycle Club met with members of the Vicksburg Police Department on Friday as part of the club’s winter event, which took place over the weekend in the River City. (Photo Courtesy of Vicksburg Convention Center)

The Punishers were in town over the weekend, and children in Warren County benefitted.

Dressed in their black vests and jackets with skull emblems on their backs, the Punishers give the impression that they’re a fierce group of guys looking for trouble. But looks can be deceiving and in the case of the Punishers Motorcycle Club, they are — these were the good guys. In this case, the club raised $7,500 to purchase toys that would be given to children through programs provided by the Warren County Sheriff’s Office and Vicksburg Police Department.

“We’re a law enforcement motorcycle club, but we’re police, firefighters, EMTs, military and like-minded individuals, so we have plumbers, people working at Walmart, too,” said Rusty “Lucky” Page, a lieutenant with the Faulkner County, Ark., Sheriff’s Office and the club’s national sergeant at arms who was coordinating the club’s trip to Vicksburg that brought approximately 600 people to the city.

“We do two national events each year. We do a summer event and a winter event which is our Christmas party for the year; a national event. We see brothers from all over,” Page said. “We’ve got brothers who came down from Canada for all this and then we’ll hold a summer rally somewhere in the United States.

“We’re in 14 countries and we do this around the world almost daily,” he added. “This weekend, we’re making donations to the sheriff’s office and police department for their toy drives.”

Saturday morning, after gathering with members for a ride to Port Gibson and doing a “last rev” to honor members who have died, a group of Punishers went to Walmart to buy toys.

“We had three different groups in the club that donated $1,000 each, plus all riders were instructed to bring a toy with them, so we’ve got riders bringing in toys right now,” he said Friday.

Page said Vicksburg was selected as the site for the rally after five of the club’s Mississippi chapters wrote the club’s rally committee asking to have it in Mississippi.

“We looked over (the state) and found Vicksburg and it worked out perfect,” he said. “The convention center, they’re awesome; they’ve been wonderful to us, the police department and sheriff’s office opened their arms to us and helped us with whatever we needed. The hotels we’ve got have been wonderful.”

The club’s name, he said, has no direct connection to law enforcement.

“That’s what the president came up with,” he said.

Some people, he said, get upset when they hear the name “and wonder why would law enforcement name themselves ‘The Punishers,’ but when people do bad they’ve got to be punished.”

Page said the club has a special recognition for its deceased members.

“One thing we’ve got is what we call our 31st Chapter. When we were 30 chapters in, we had a brother pass away, so what we did was move him from his home chapter into the 31st chapter. We now have 57 members in the 31st Chapter and we do a special program honoring that chapter and a table for them.” Club chapters also raise money for the 31st chapter and the members’ widows were brought in for the weekend. “We take care of them all weekend in remembrance of their husbands,” Page said.

And while the rally in Vicksburg is a major event for the club, it’s not the only event during the year.

“A chapter is always having something each weekend; there’s always something going on every day,” Page said. “Each chapter is constantly doing events.”