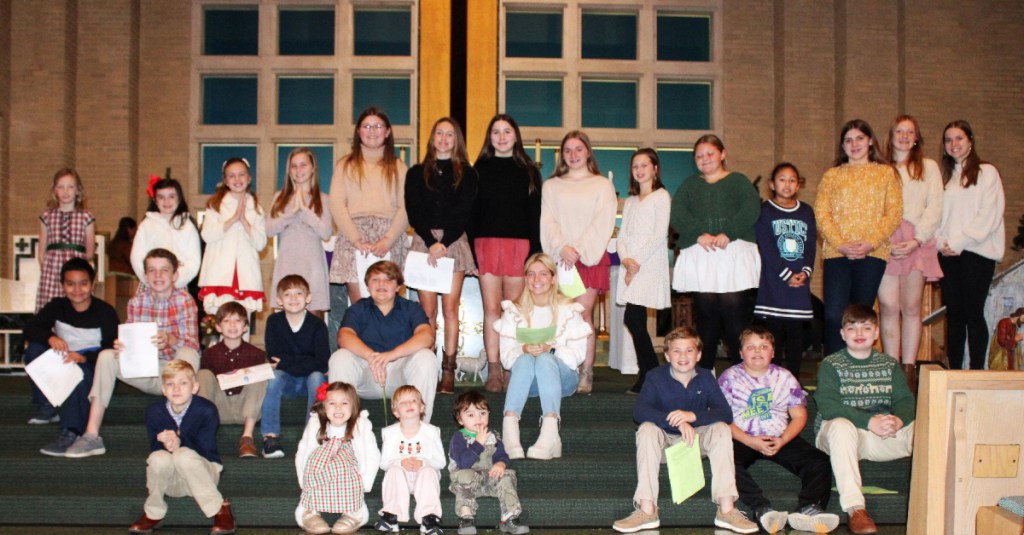 The cast of St. Paul Catholic Church's Christmas program takes a break from rehearsal. The program will take place on Saturday before the church's 4 p.m. Mass. (Photo by John Surratt | The Vicksburg Post)

Saturday evening, before the start of the 4 p.m. Christmas Vigil Mass at St. Paul Catholic Church, the children of the parish will remind the parishioners of the reason for the season.

The children’s program at St. Paul’s begins at 3:40 p.m. and involves 30 children from ages newborn through high school seniors playing the roles of angels, shepherds, the wise men and Mary, Joseph and the baby Jesus as they re-enact the first Christmas.

“I believe we’ve been doing it for 10 years,” said Jordan Amborn, the program’s director. “We incorporate the gospel story of Jesus’ birth along with traditional Christmas hymns; we have the children sing the songs that are interspersed throughout the script.”

The program begins with the angel telling Mary that she will give birth to Jesus and follows Mary and Joseph through their trip to Bethlehem and to the stable where Jesus is born, with visits from the shepherds and the three wise men, who bring their gifts of gold, frankincense and myrrh.

The older children have the larger parts — the speaking roles and the roles of Mary and Joseph. Other children read the scripture during the program and the songs are directed from the podium.

Amborn said a newborn baby plays the baby Jesus, adding there is a doll to replace the infant if he becomes “fussy” during or before the program. In the past, infant boys and girls have portrayed Jesus. This year, the child is a boy.

In the past, Amborn said, the program was held during the homily of the Mass, but the Rev. Rusty Vincent, the church’s present pastor, recommended the program come before the Mass.

“I think it’s good to have it before Mass because then the kids are out of costume and concentrating on the Mass,” Amborn said. “I think the kids enjoy participating in the program and the parents enjoy having it before Mass so they can watch the program before going into the actual mass.”