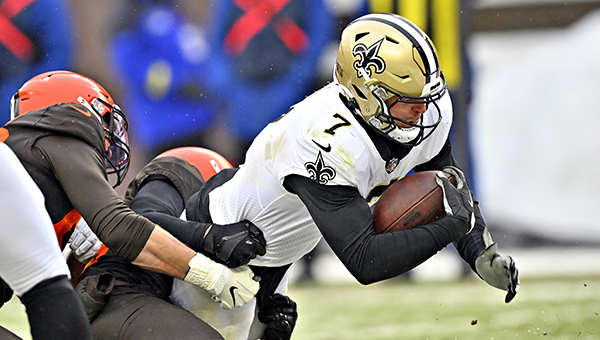 CLEVELAND (AP) — Without a roof over their heads, the Saints went outside and handled the frightful weather — and the Browns.

They’re still in the playoff mix.

Alvin Kamara and Taysom Hill each had touchdown runs as New Orleans left its comfortable dome and withstood Cleveland’s arctic-like conditions in a 17-10 win Saturday over the Browns.

The Saints (6-9) were 0-6 in outdoor games this season before rallying to beat the Browns (6-9) in the coldest game in New Orleans history.

The temperature was 6 degrees at kickoff, making it the coldest regular-season game in Cleveland history. Only the Browns’ 1981 playoff game (1 degree) against the Oakland Raiders was worse. The wind chill Saturday was minus-16 degrees.

It was coldest at FirstEnergy Stadium, which opened in 1999. During the first quarter, the Browns invited any fans sitting in the upper deck to move to the lower bowl and hundreds of fans accepted the offer.

The Saints had never been this cold. Their previous coldest game was 24 degrees on Dec. 26, 1993 in Philadelphia’s Veterans Stadium.

“I didn’t want to be a part of that,” joked Kamara, who wore a scuba-like suit under his jersey. “The elements are the elements, so you just use common sense out there. It was cold. Nothing was going to stop it from being cold. On those long runs, I was really more fired up to get back to the heat on the sideline.”

Quarterback Deshaun Watson drove Cleveland to the Saints’ 15 in the final minute, but he was sacked on fourth down by Carl Granderson — one play after tight end David Njoku let a TD pass slip through his hands — with 19 seconds left, ending the Browns’ postseason hopes.

Kamara scored on a 4-yard run late in the third quarter — set up by Daniel Sorensen’s interception of Watson and 36-yard return — as the Saints, still kicking in the NFC playoff hunt, overcame a 10-0 deficit.

New Orleans came in trailing Tampa Bay by one game in the weak, wide-open NFC South. The Saints, who traveled to Cleveland a day early to acclimate to the bone-chilling weather, aren’t done yet. They play at Philadelphia next week, and then finish the regular season at home against Carolina.

“We said this game was going to be about mental toughness, and the mentally tougher team would win,” Saints coach Dennis Allen said. “Now, Friday morning was an eye opener when we went outside, but we were prepared for this.”

Cleveland is guaranteed a losing season in coach Kevin Stefanski’s third year, which was shaped by Watson’s ban.

Watson had a 12-yard rushing TD but struggled to pass in the blustery conditions (15-of-31 for 135 yards) and fell to 2-2 as a starter since returning from his 11-game suspension for sexual misconduct allegations.

The Browns’ porous rushing defense was a problem once again as the Saints, rotating Andy Dalton and Hill at quarterback and snapping it directly to Kamara, rolled up 152 yards on the ground.

“When you can line up and they know you’re going to run the ball, and you can still do it successfully, that’s big,” said Hill, who ran for 56 yards on nine carries. “That’s what we came in wanting to do.”

Kamara’s TD was the 72nd of his career, tying him with Marques Colston for the most in Saints history.

After getting a 23-yard field goal by Wil Lutz on the final play of the first half, New Orleans took the second-half kickoff and drove 67 yards for a tying TD with Hill barreling in from the 8-yard-line to make it 10-all with 9:40 left.

Watson’s TD scamper gave the Browns a 7-0 lead early in the second quarter.

With Cleveland’s offense unable to do anything productive, the defense came through as safety Grant Delpit intercepted a pass by Dalton that went off tight end Juwan Johnson’s hands and returned it 40 yards to the Saints’ 30.

Five plays later, Watson swept left on third down and scored untouched for his first rushing TD with Cleveland.