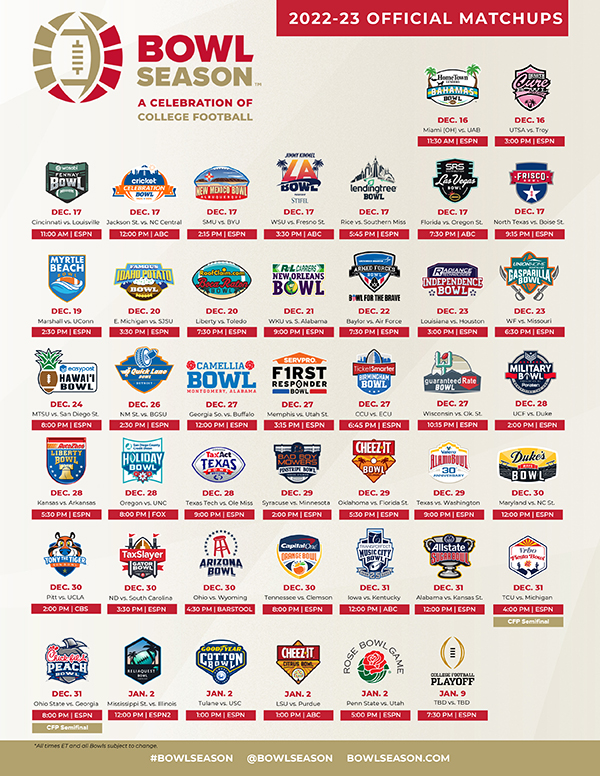 We’re heading into the second week of college football’s bowl season. It’s hard to break down 43 games in depth, so here are some quick-hit thoughts on a few of the more noteworthy ones:

• Considering last weekend’s New Mexico Bowl featured BYU vs. SMU in ABQ, it should have been called the Acronym Bowl.

• No disrespect to either team, but seeing 5-7 Rice vs. 6-6 Southern Miss in the Lending Tree Bowl in Mobile on Dec. 17 is not exactly making the case for more bowls to be added to the schedule.

• Cincinnati’s coach was hired by Louisville, a few weeks before the teams played each other in the Fenway Bowl in Boston. Awk-warrrd …

• Does the winner of the Birmingham Bowl between Coastal Carolina and East Carolina get to proclaim themselves the king of the Carolina directional schools?

• Missouri landed in the Gasparilla Bowl in Tampa instead, against Wake Forest. That’s … better?

• Oklahoma-Florida State was the national championship game in 2000, and could have been a Playoff game as recently as seven or eight years ago. Now it’s the Cheez-It Bowl, and a cause of holiday depression.

• Speaking of depression, the Guaranteed Rate Bowl in Phoenix, with one-time Top 20 teams Wisconsin (6-6) and Oklahoma State (7-5), is the epitome of “Why do we have to play this game?”

• Remember when Syracuse was a spunky 6-0, ranked in the Top 25 and leading Clemson on the road at halftime? Yeah … they finished 7-5 and wound up playing Minnesota in the Pinstripe Bowl. There have been meteors that didn’t crash that hard.

• Maryland vs. North Carolina State in a postseason game in Charlotte should be reserved for the ACC basketball tournament, not a football bowl game.

• I have nothing to say about the Sun Bowl (UCLA vs. Pittsburgh on Dec. 30) other than it’s played in a stadium literally built into the side of a mountain. That’s really cool.

• LSU vs. Purdue in the Citrus Bowl, in a match-up of conference runners-up, is the “You were ThisClose” Bowl.

• Tennessee vs. Clemson seems like a uniform match-up Orange Bowl executives have waited their whole lives for.

• The winner of the award for “Bowl game not even people betting on it will watch” goes to the Arizona Bowl. Wyoming and Ohio play in Tucson, on the afternoon of Dec. 30, in a game streamed only on Barstool Sports’ app.

• Ole Miss lost four of its last five and is stumbling into the Texas Bowl (Dec. 28 vs. Texas Tech) like a drunken frat boy making the walk of shame.

• It’s Mississippi State vs. Illinois in the ReliaQuest Bowl in Tampa on Jan. 2. Every time you call it the Outback Bowl, you need to go sit in the corner for five minutes and try to figure out what it is ReliaQuest does. No Googling.

• Speaking of the ReliaQuest Bowl, it’s very fitting that the football wake for Mike Leach is in a stadium that contains a pirate ship.

• Back in July, when I was talking to Tulane linebacker and Vicksburg native Nick Anderson at the Malcolm Butler Football Camp, he said he thought the Green Wave would have a special year. Everything went wrong in 2021, he said, and every key player was coming back and motivated. He had no doubt they’d be a lot better than their 2-10 record last season.

Tulane finished 11-2, won the American Athletic Conference championship, and will play Southern California in the Cotton Bowl on Jan. 2.

I should have asked Nick for some lottery numbers.

Ernest Bowker is the sports editor for The Vicksburg Post. He can be reached at ernest.bowker@vicksburgpost.com