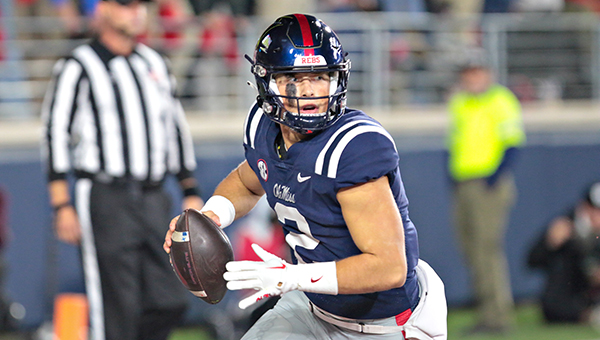 In the modern college football landscape, teams are rarely at full strength for their bowl games.

Between the end of the regular season in late November and the start of the bowl season in December, players often leave their teams for the NFL draft or to seek out new opportunities via the transfer portal.

That reality, however, makes the TaxAct Texas Bowl a bit of a throwback.

Although some will not play because of injuries, no players from Ole Miss (8-4) or Texas Tech (7-5) have opted out of the game Wednesday in Houston. The only major player missing for either team is Texas Tech linebacker Tyree Wilson, who declared for the NFL draft following a November foot injury.

Texas Tech coach Joey McGuire said that should give this bowl an extra layer of intensity that’s missing from many others.

While they’ll both be at full strength, the Rebels and Red Raiders are entering the Texas Bowl on different trajectories.
Texas Tech finished the regular season on a three-game winning streak and Ole Miss lost four of its last five.

Ole Miss’ swoon was capped off with a 24-22 loss to Mississippi State in the Egg Bowl on Thanksgiving night. It also let two-score leads slip away in three of those four losses.

“Obviously that last game was disappointing, how we finished that and how we finished the season in general,” Kiffin said Monday in Houston. “The season was like some games where we start really well and then didn’t finish strong. We can only worry about what we can control now.”

Among the players sticking it out for Ole Miss is running back Zach Evans. He was the Rebels’ second-leading rusher with 899 yards and six touchdowns . The junior hasn’t yet decided if he’ll stay at Ole Miss or declare for the NFL draft. No matter what, he’s looking forward to a big performance Wednesday.

Evans and freshman Quinshon Judkins lead a rushing attack averaging 261.6 yards a game and will face a Texas Tech defense that ranks 89th in the nation by allowing 166.4 yards rushing.

Given the way the regular season ended, Kiffin said it would have been easy for some of his players to opt out. Several players, such as backup quarterback Luke Altmyer and cornerback Miles Battle, have announced their plans to enter the transfer portal. They still made the trip to Houston for the bowl game, however, and Kiffin praised them for sticking it out to the end.

“I think it says a lot for these players, them wanting to finish,” Kiffin said. “It’s very easy not to play, to opt out and go in the portal because the season didn’t end great. I think that’s really neat to these guys.”

At the same time he’s been preparing the 2022 Rebels for their final game, Kiffin has been constructing the 2023 roster.
Ole Miss signed 12 high school players on national signing day last week, including the two highest-rated prospects out of Mississippi in linebacker Suntarine Perkins (Raleigh) and receiver Ayden Williams (Ridgeland).

The dozen players signed so far represent about half the 2023 recruiting class. The roster will be filled out with February signees and transfers. Kiffin said a large number of returning players also limited the number of players that were signed.

“We have a plan. It’s a different day and a different time with the way things are. We signed 12 on that day and you’ve already seen significant portal players since then,” Kiffin said. “And remember, we didn’t lose as many as a lot of people did. I think our number is at 20. You’ve got to know what you have vs. going out and signing 30 guys.”

Texas Tech has had a revolving door at quarterback this season, with three players who have thrown for at least 1,000 yards. They’ll go with Tyler Shough on Wednesday; he went 4-0 this season, including wins in the team’s last three games, throwing for 1,062 yards and six touchdowns with three interceptions.

Shough missed time with a broken collarbone in the team’s opener that kept him out until Nov. 12.

“You start seeing who he is as a football player,” McGuire said. “He’s an NFL-caliber quarterback. I’m really excited to see him play in NRG against a really good football team.”