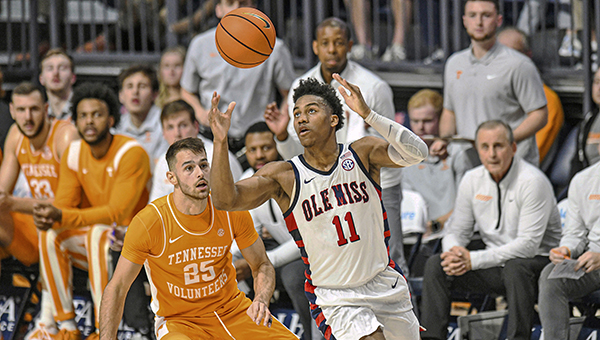 Ole Miss guard Matthew Murrell (11) grabs the ball as Tennessee's Santiago Vescovi (25) defends in the first half on Thursday. No. 7 Tennessee defeated Ole Miss 63-57 in the Southeastern Conference opener for both teams. (AP Photo/Bruce Newman)

Then Santiago Vescovi and Zakai Zeigler delivered for the Vols.

Vescovi scored 22 points and combined with Zeigler to convert six free throws in the final 1:09, helping No. 7 Tennessee top Ole Miss 63-59 on Wednesday.

“It’s going to be a grind every night,” Volunteers coach Rick Barnes said. “It’s the kind of game we expected. They were tougher than us in the first half, but in the second half, we played well and did the things that have gotten us to this point. Overall, it’s a real good win.”

“Starting the conference schedule with a ‘W’ really means a lot to us,” Vescovi said. “It’s a real confidence boost. Good road win.”

Ole Miss (8-5, 0-1) was led by Jaemyn Brakefield with 18 points, including four 3-pointers in the second half. Amaree Abram added 10 points while Matthew Murrell, averaging 15.6 points per game, was held to five on 1-for-11 shooting.

“Those two guards (Vescovi and Zeigler) were really good, maybe the toughest in the league,” Ole Miss coach Kermit Davis said. “But this was typical Ole Miss and Tennessee. Our guys competed their tails off and Tennessee got it done at the end. Tennessee is impressive.”

Jonas Aidoo had a game-high 13 rebounds as the Vols outrebounded Ole Miss 38-28.

“I told Jonas that I didn’t need him to shoot like he was in the first half,” Barnes said. “I needed him to make the difference inside by being physical. … That was big for us in the second half.”

Ole Miss finished 19-of-51 (37 percent) from the field. It converted only seven baskets in the second half, including four by Brakefield.

The loss was disappointing for the Rebels, especially after a deflating home loss to North Alabama and an inconsistent December. The defense and Brakefield had quality performances, but the Rebels were not strong enough to overcome an atypical shooting night by Murrell.

Since starting the season with a six-game winning streak, Ole Miss has lost five of seven over the past month and the early part of the SEC schedule isn’t easy. Its next two games are both on the road against Top 25 opponents, Jan. 3 at Alabama and Jan. 7 at archrival Mississippi State.

“We aren’t going to hang our heads, there is a long way to go,” Brakefield said. “We played hard and they did, too. They made the shots at the end.”