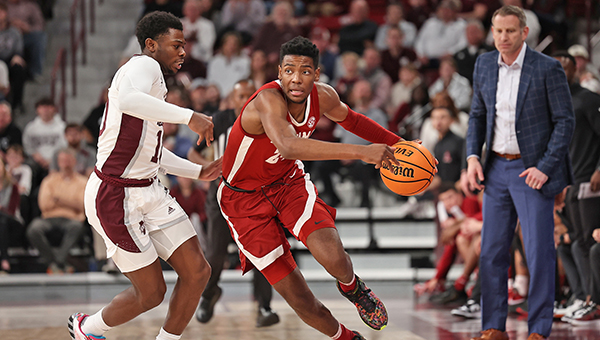 STARKVILLE (AP) — Mark Sears scored 20 points and No. 8 Alabama pulled away in the second half to beat No. 21 Mississippi State 78-67 on Wednesday night in the Southeastern Conference opener for both teams.

“I’m proud of the team. Road wins are not easy to get in this league,” Alabama coach Nate Oats said. “We went on the road against a Top 25 team and were able to come out with a pretty convincing win. I think it speaks to what our guys were able to do, especially on the defensive end.”

The Crimson Tide held the Bulldogs to 11 field goals inside 3-point range, and all-SEC big man Tolu Smith had a rough night, going 3-for-15 from the free -throw line and 1-for-7 from the field as he finished with five points.

“I can talk about this because I know what kind of man he is, but the elephant in the room — Tolu Smith missed 12 of our 18 (free throws),” Mississippi State coach Chris Jans said. “He’s been shooting them so well. He struggled out of the gate but if you look game-by-game, he was much better the last few games than he was the first four or five games. I’m not sure what happened tonight.”

Mississippi State missed 11 free throws in the first half alone, with Smith going 2-for-10, but the Bulldogs trailed just 34-30 at halftime.

Alabama steadily put the game out of reach in the second half, leading by as many as 17 points.

“We had 19 turnovers which was obviously not very good, but I thought we were able to overcome them,” Oats said. “They really hang their hat on how hard they play and how they rebound. For us to outrebound them, I thought our defense was better than theirs. I was proud of our guys.”

Noah Clowney had 12 points for the Crimson Tide and Nick Pringle finished with 10 points on 4-of-4 shooting.

After starting the season with 11 consecutive victories, Mississippi State has lost its last two. It plays at No. 7 Tennessee on Jan. 3, and hosts in-state rival Ole Miss on Jan. 7.

“We’ve got to play better. The first thing that I told the team is that they played better than us. They deserved to win,” Jans said. “We’re going to watch the video, try to learn and grow, show them what we did well and didn’t do well. We’ve got to move on. We are who we are and it’s probably not going to change a whole lot.”