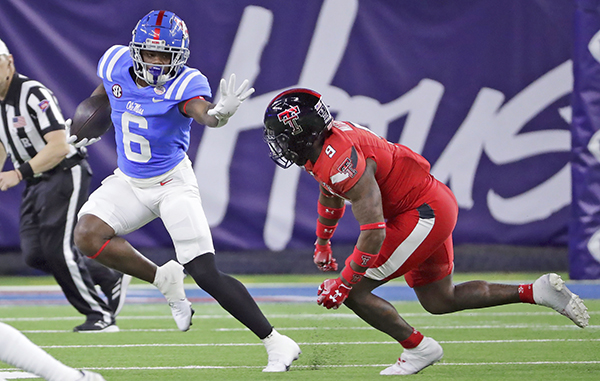 Joey McGuire got a new contract with a hefty raise before leading the Red Raiders to a 42-25 victory over Ole Miss in the Texas Bowl on Wednesday night.

“It’s a pretty awesome day,” said McGuire, who was given a six-year, $26.6 million contract earlier Wednesday. “I really do love this place, love this team, love the school, love everything about Texas Tech … we’ll work every single day to reach our goals at Texas Tech.”

Tyler Shough threw for 242 yards and a touchdown and ran for two more scores as Texas Tech took advantage of three early turnovers to build a big lead and held on for the victory.

Shough, who finished with a career-high 111 yards rushing, accounted for three TDs in the first two quarters to help the Red Raiders (8-5) to a 26-7 halftime lead. He overcame food poisoning that had him up all Tuesday night vomiting to earn Texas Bowl MVP honors.

“If we would have played at 11 o’clock this morning he wouldn’t have been able to go,” McGuire said.

Shough said he spent the night curled up by the toilet and had to get four IV’s Wednesday just to get through the game. He said he joked with his teammates that he’d need to bounce back like Michael Jordan did in his infamous “flu game” for the Red Raiders to win.

“I felt like absolute crap leading up to it,” Shough said. “I was starting to fade at the end of the game. I definitely need to eat something pretty soon.”

Ole Miss quarterback Jaxson Dart had 361 yards passing with two TD throws and a touchdown run. But, he threw two of his three interceptions and lost a fumble in the first half to put the Rebels in a huge hole.

“When you make costly mistakes and you don’t play up to the standard and help our team win the game, that’s really frustrating,” Dart said.

The loss continued a terrible stretch for Ole Miss (8-5), which dropped its final four games, and five of its last six, after opening 7-0 and climbing as high as No. 7 in the country. The Rebels played a sloppy game with five turnovers and eight penalties for 86 yards, and had two defenders ejected for targeting.

“This would have been a great game to win down here against a very good team and go out for those guys that it was their last game,” coach Lane Kiffin said. “Credit to them. I thought they did a great job stopping the run.”

Ole Miss scored consecutive touchdowns to get to 35-25 with three minutes to go. The Rebels attempted an onside kick, but Texas Tech’s Loic Fouonji grabbed it and returned it 44 yards to push the lead to 42-25.

Ole Miss was 2-for-7 on fourth down attempts, and Texas Tech was 5-for-6. Among Ole Miss’ fourth-down misfires were tries from its own 27- and 32-yard lines, with one of those on a fake punt. The Rebels also went for it from their own 11 and got a first down.

Kiffin said going for it on fourth down was part of the plan in what he expected to be a high-scoring game.

“Obviously, that’s not the plan to not make it, but those were critical decisions,” Kiffin said. “They didn’t work out, and I think it stopped and started early. Getting beat on fourth and one. You know, where we don’t make the block, and the guy hits us in the back field. It was discouraging because they had a lot of similar fourth downs and did a really good job with some really good scheme runs to scheme us up.”

The Red Raiders used their first offensive play to pay tribute to former coach Mike Leach, who died Dec. 12 at 61. Texas Tech lined up in Leach’s famous “Air Raid” formation with the lineman spread far apart and four receivers out wide and simply stood there until a flag was thrown for delay of game.

Kiffin declined the penalty, and the Red Raiders then ran their first play.

Both teams also remembered Leach, who coached at Texas Tech from 2000-09 and was the coach at Mississippi State when he died, with helmet decals. Texas Tech’s looked like pirate flags as a nod to his fascination with pirates, and the Rebels’ decals said ‘Mike’ with the ‘I’ in the shape of a cowbell for Mississippi State’s tradition of using them at games.

“There’s very few people in this game that have changed the game the way he did,” McGuire said. “We just wanted to come out and honor him, tip our cap to him.”