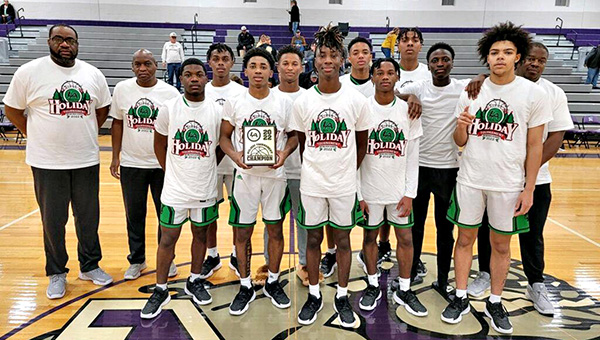 Vicksburg High's boys' basketball team holds the trophy after winning the championship at the LA Realty Holiday Tournament Friday in Milan, Tennessee. The Gators went 3-0 in the tournament and won their games by 35, 19 and 30 points. (Submitted to The Vicksburg Post)

The Vicksburg Gators got what they came for on their post-Christmas road trip to Tennessee — a trophy and a great finish to the first half of the schedule.

Michael Johnson and Tyler Henderson combined for 32 points, and the Gators pulled away from Loretto in the second half to win 66-36 in the boys’ championship game of the LA Realty Holiday Basketball Tournament on Friday.

Johnson, a freshman, led the way in the championship game. He scored 10 of his game-high 17 points in the second half and made three 3-pointers. He also had five rebounds.

The Gators only led by eight points at halftime, but steadily pulled away in the second half. Knight had seven of his nine points in the fourth quarter, when the Gators outscored Loretto 24-9 to put the hammer down and turn the game into a rout.

The Gators will return to action Tuesday, when they begin their Region 3-5A schedule on the road in Jackson against Callaway. The girls-boys doubleheader will start at 6 p.m.