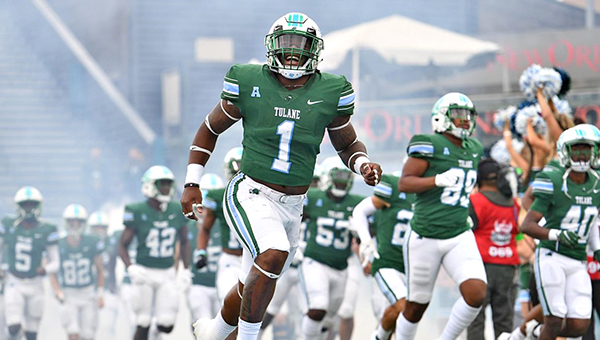 Tulane linebacker Nick Anderson runs onto the field with his teammates before a game this season. Anderson, a senior linebacker and former Vicksburg High star, will lead the 16th-ranked Green Wave against No. 10 Southern California in the Cotton Bowl on Monday. (Tulane University Athletics)

Nick Anderson looked up, and a flood of images was burned into his brain.

The clock at triple zeroes. Fireworks exploding high above Tulane’s Yulman Stadium, as a sea of humanity poured out of the stands toward him. The feeling of utter triumph and joy that only comes around a few times in a lifetime.

It was a scene Anderson envisioned for months, spoke about for months, and then got to live out after Tulane defeated Central Florida for the American Athletic Conference championship on Dec. 3.

“I was at Tulane when we were losing, going 6-6, and you had half the stadium is empty,” said Anderson, a Tulane linebacker and former Vicksburg High star. “Us having a sold-out crowd, hosting the conference championship, seeing the confetti, the students rushing the field, is something I’ll never forget for the rest of my life.

“The hugs, the smiles, the cameras, people just genuinely thanking for me bringing life into their lives simply by playing the game of football … that was the most influential thing this year, was God using us.”

Tulane’s victory over UCF for the American title was the high point — so far — of its rise from the dregs of college football to the upper tier of the sport.

It also guaranteed the Green Wave a marquee spot in the bowl lineup. It will take on Heisman Trophy-winning quarterback Caleb Williams and No. 10 Southern California in the Cotton Bowl Monday in Arlington, Texas.

For Anderson, an All-AAC linebacker who racked up 108 tackles this season, there’s no better way to finish his college career.

“How else would you want to cap off your season? Playing in one of the most renowned bowl games there is, against a great team like USC, against a familiar coach that we lost to last year, and against Caleb Williams who is well deserving of the Heisman,” Anderson said. “How would you not want to be on that stage to show off your talents and what you’re capable of doing? It’s a blessing. I can’t wait to get to Dallas and get the whole experience.”

Tulane was supposed to host No. 2 Oklahoma — whose roster included Williams and current USC coach Lincoln Riley — in the 2021 season opener. Then Hurricane Ida rolled through New Orleans, causing enough damage to the city that Tulane’s football program was forced to relocate to Birmingham for nearly a month.

The Green Wave played at Oklahoma instead, losing 40-35 to begin a difficult 2-10 season.

Anderson said those hard times planted the seeds for this year’s success. Living on the road together brought the team closer and, when nearly the entire starting lineup returned this season, it was to do something special.

“This year I really felt like I was playing for my brothers beside me and they were playing for me. We couldn’t have built those type of bonds without going through the things we went through,” Anderson said. “It really made us stronger as a team. It made us connect as a unit. You could see that through the season we had.”

Anderson also went through some personal difficulties. His sister was seriously injured in a car accident in August 2021, and he suffered a broken leg in a game at Ole Miss a few weeks later.

The trials, he said, only reaffirmed his faith that something good awaited at the end of it all.

“I just focused on looking at the positives,” he said. “Just looking at everything we went through last year, and everything that I went through myself with injuries, my sister being in a car accident, us losing so much. I just knew that God wouldn’t take us through all that to not bless us in the back end.”

During the offseason, Anderson preached that message not only to his teammates, but anyone who would listen. He touted Tulane’s returning assets and the idea that things couldn’t possibly go more wrong than they did in 2021 as reasons why 2022 would be better.

Anderson talked often about “speaking it into existence,” and it soon became reality.

The Green Wave started with three consecutive victories, including a 17-10 upset on the road against eventual Big 12 champion Kansas State.

“First, you have to believe in yourself and God before you get others to believe. Then speaking it into existence, that is infectious,” Anderson said. “Me being able to go around and say this year the standard is a conference championship. It’s not a bowl game. It’s not seven wins. Other guys were saying it and coaches were believing it, and we got it done.”

Following a loss to Southern Miss, Tulane won its first five conference games and Anderson said he noticed people around New Orleans starting to believe in the team as well.

The Green Wave lost to UCF in November, but earned the right to play and host them again in the conference championship game three weeks later. Tulane rolled to a 45-28 victory that placed them at No. 16 in the final College Football Playoff rankings.

As the highest-ranked team among those in the Group of Five conferences, Tulane received a bid to the Cotton Bowl. It is the program’s first appearance in a major bowl game since the 1940 Sugar Bowl, and the most national attention it has gotten since finishing undefeated in 1998.

“It was historic. Tulane hasn’t really had a season like that since 1998,” Anderson said. “To see the alums be excited, the fans, to see people in the community in New Orleans stop you in the store and tell you how much you’re doing for them, with them being diehard Tulane fans, it showed me how much football affects people outside the organization as much as it does in.”

Using football as a pathway to touching people’s lives is something Anderson embraced during his college career. In addition to starring on the field, he has been honored several times by the university for his academic achievements and community service.

Anderson was Tulane’s nominee in both 2021 and 2022 for the William V. Campbell Trophy that recognizes the country’s top football scholar-athlete. He was also a nominee for this year’s Wuerffel Trophy, which recognizes community service work.

Earlier this week, Anderson won the Cotton Bowl’s Dan S. Petty Scholar-Athlete Award. The honor is given to one player from each of the participating teams to recognize their combination of academics, athletics, citizenship, leadership and sportsmanship.

Anderson thanked both Tulane and his friends, family and supporters in his native Vicksburg who helped him fulfill that goal.

“That’s a testament to God and his role in my life, is Him putting me in positions to give my testimony,” he said. “In everything I’ve done, I’ve always given Him the glory. I’ve always used my football career to tell people about Him or show people that He’s done powerful things in my life and he can do the same for you.”

Anderson graduated from Tulane last May with a degree in Homeland Security Studies, but he’s not yet ready to leave football behind. Tulane’s success has drawn the attention of NFL scouts, and Anderson said he’s hoping to get a look from teams ahead of the 2023 draft.

In addition to his 108 tackles, Anderson has four pass breakups, two sacks and two forced fumbles. He’s played a variety of roles for a defense that ranks No. 35 in the country in total yards per game.

Anderson said that while he was primarily a pass rusher and run stopper earlier in his career, he’s been used in pass coverage more this season. As the Green Wave’s middle linebacker, he’s also called signals for the defense.

“This year was a great year for me to really show my talents to NFL scouts and show I can play different positions,” he said. “Against Tulsa I even caught a direct snap on a punt and got a first down. I’ve been a jack of all trades for my team. That’s what I planned on doing — anything I could to get the team to where it is now. That’s one of the things I’m proud of.”

Anderson has one more showcase game, both for himself and for the university and community he loves. Tulane is the underdog against one of the sport’s most storied programs, but being in a position to try for a milestone victory is just another dream fulfilled.

“It’s been a blessing. It seems like a blur, like just a couple of weeks ago we were at the Malcolm Butler camp (in July) talking about it. Now it’s December, it’s Christmas and we’re going to the Cotton Bowl playing the Heisman Trophy winner. It’s amazing, man,” Anderson said. “It’s a blessing from God. It’s a true testament to trusting Him and putting him first, what He can do.”