2022 IN REVIEW: A year of progress for the River City 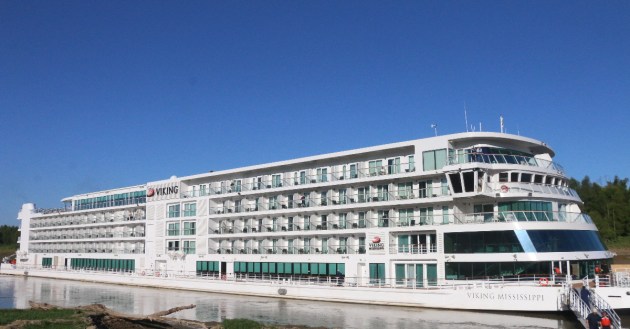 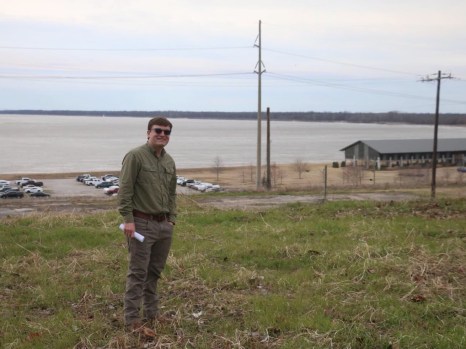 John Reid Golding stands on property his family donated to the city of Vicksburg and Warren County. (Photo by Terri Cowart Frazier | The Vicksburg Post) 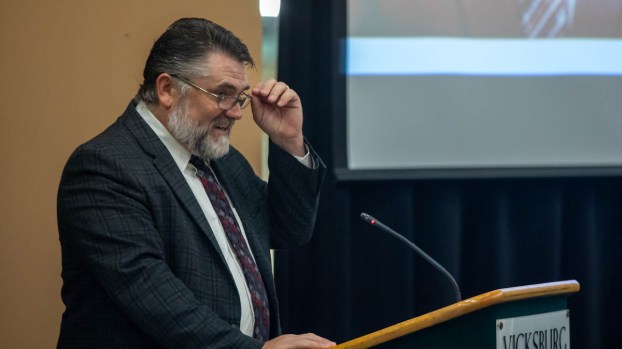 Superintendent Chad Shealy spoke at a Chamber of Commerce luncheon about the recent accomplishments of the Vicksburg Warren School District and what they mean for the community. (Photo by Ben Martin | The Vicksburg Post) 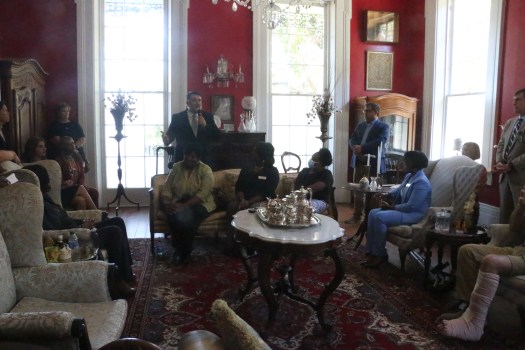 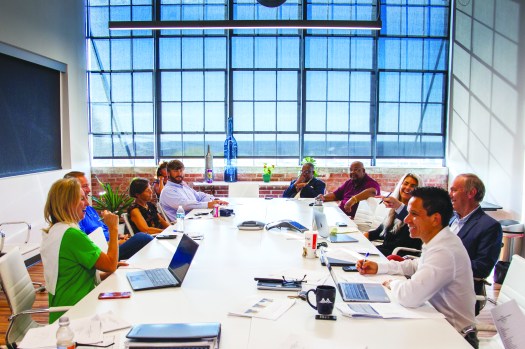 The Vicksburg Warren County Chamber of Commerce moved into its new home at MCITy this year. (Photo by Ben Martin | The Vicksburg Post) 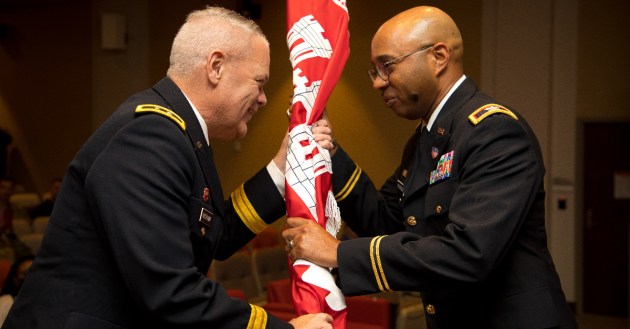 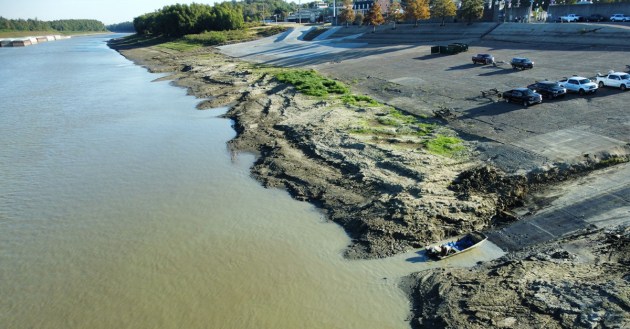 Five years after the concept of the Mississippi Center for Innovation and Technology was presented to the Vicksburg Board of Mayor and Aldermen, tenants moved in and started calling MCITy home.

Two of the organizations, the Vicksburg Warren Partnership and ERDCWERX, moved into their spaces in March.

The MCITy project was part of the vision by the late Sen. Thad Cochran for Mississippi as a state to fully capitalize on tech transfer and federal contracting opportunities to create high-paying jobs and benefit small and medium-sized companies.

In addition to ERDCWERX and the Partnership, academic entities also moved into MCITy this year, including Hinds Community College and Mississippi State University, with goals to establish a state-funded Mississippi Research Consortium.

Vicksburg Commons, formerly the Outlets of Vicksburg, saw several changes in 2022, beginning with the death of its champion and manager, Margaret Gilmer.

Gilmer died on Jan. 2 following an illness and left behind a legacy of pioneering business decisions. In memory of Gilmer, the bridge on the newly completed South Frontage Road Extension will bear her name.

Later in the year, a Texas-based company became the new owner of the Vicksburg Commons, formerly known as the Vicksburg Factory Outlets, located at 4000 South Frontage Road. TCP Realty Services, LLC, based in Houston, Texas, a property management and real estate investment group that operates throughout Texas and the Southwest U.S., purchased the more than 96,000-square-foot building and its nine acres of land after the property was put up for action on Sept. 27 by Blue Ridge Capital. Vicksburg resident and Curb Appeals Real Estate owner, Mary Jane Fant, stated the company plans to keep the current tenants who are leasing space and will be looking for national tenants as well. In addition, the facility will retain its name — Vicksburg Commons — and Fant will work as TCP’s leasing manager.

One of Vicksburg’s most beloved public parks was officially closed in February 2022, but not without a glimmer of hope.

The Board of Mayor and Aldermen and the Warren County Board of Supervisors voted to close the original Riverfront Park site in early February. It’s a decision Mayor George Flaggs Jr. said was not easy to make.

The engineers, he said, could not guarantee or predict the city and county would not have to spend any more money on the park to mitigate problems caused by the Mississippi River because of the river’s current.

“At that point,” Flaggs said, “It’s cost-prohibitive. The other (problem) is because of the criminal activity and the vagrants living in there now. It’s not a safe place to go down to.”

However, a week later, the Golding family, of Golding Barge Line, chose to donate a tract of its land along Oak Street for the purposes of making a new Riverfront Park. The 5.5-acre plot had previously been for sale, but company president John Reid Golding said it would be best used as a public gathering place.

“Vicksburg has given us and our business so much and such a tremendous workforce we wanted to give back, and this was a great opportunity to give back a piece of property that has so much potential to be a fantastic park,” he said.

The city and county appointed individuals to an advisory committee for the purpose of developing the park, and discussions are still underway.

It wasn’t an extraterrestrial life form, a meth lab gone bad or a piece of SpaceX equipment that survived re-entry to the earth’s atmosphere — the ‘loud sound’ and fireball reported in the sky early on the morning of April 27 was a meteor, as confirmed by the National Aeronautics and Space Administration (NASA).

The fireball could be seen in Arkansas, Louisiana and Mississippi and traveled across the sky at a speed of 55,000 mph.

It disintegrated approximately 34 miles above the swampy area north of Minorca in Louisiana. The fragmentation of this fireball generated an energy equivalent of 3 tons of TNT — but not before scaring the daylights out of more than 30 eyewitnesses that morning.

Local authorities urged residents that, should a phenomenon like this happen again, the best thing to do is to call 911.

Patterson, who has a public affairs background and who has been stationed at ERDC as the organization’s director of communications, is the first commander to come from within ERDC.

A native of Jackson, Patterson enlisted in the Mississippi National Guard in 1994 as a private broadcast specialist. He was commissioned a second lieutenant from the Louisiana State University Reserve Officer’s Training Corps.

He has a bachelor’s degree in mass communication from LSU, an associate’s degree in TV and film from Hinds Community College and a master’s in business administration from Belhaven University.

He has been stationed at ERDC for three years.

“One of the big things (at ERDC) we’re trying to grow stronger and stronger in every day is getting the message out about the tremendous work that’s being done here in Vicksburg and at our other sites outside the state,” he said.

“I’ve been at ERDC serving the past three years and made the rounds of our facilities to understand the science and technology that’s going on,” Patterson said. “I’ve been blessed to be able to kind of break that down so that people can understand.”

Great to B in VWSD

The Vicksburg Warren School District made headlines in 2022 for a remarkable academic achievement — earning a B letter grade from the Mississippi Department of Education.

“The school board of trustees has, for years, been working to transform the district and to support teaching the skills our students need to be successful in college, career and life,” VWSD Superintendent Chad Shealy said during the announcement. “I am proud of the effective strategies we have used to engage students and of the hard work our teachers, students, principals, families, staff, and community partners have done to jump two letter grades to a B rating.”

Mississippi’s school grading system considers many indicators, including how many students score in the top two levels on the Mississippi Academic Assessment Program (MAAP) tests for English Language Arts and Mathematics in grades 3-8 and high school, whether students score the same or higher on state tests each year as new content is introduced, and whether students are graduating within four years of entering the ninth grade. The system also factors in performance on the ACT and advanced high school courses and how well schools are helping English learners and the lowest-achieving students make progress toward proficiency.

To round out the year, VWSD also regained its MDE District of Innovation status for the 2023-24 school year.

After several delays and months of speculation, the Viking Mississippi made its initial visit to Vicksburg on Sept. 28, docking at the riverfront and bringing 230 passengers to Vicksburg.

Viking was the first Mississippi River cruise line to sign a 20-year ground lease with the city of Vicksburg for a 600-foot section of Vicksburg’s riverfront along the Yazoo Diversion Canal to build a facility for its cruise boats located behind the Yazoo & Mississippi Valley Railroad Depot on Levee Street. Viking is building the dock.

The cruise line later signed a sublease with American Cruise Lines to use its docking facilities until Viking built its own dock. Viking in November applied to the U.S. Army Corps of Engineers for a permit to build its facility.

A lack of rain led to low levels in the Mississippi River, disrupting river traffic from Memphis south to New Orleans as levels dropped below 1 foot, heading to the record low stage of -1.7 feet, grounding some barges and forcing the closing of some areas of the Mississippi to navigation.

The problem forced the river cruise lines to alter their schedules, with Viking Cruise Lines stopping its cruises because of the low water. Other cruise lines were unable to modify their schedules and boats visiting Vicksburg were unable to land at the city’s riverfront. These lines opted instead to land at LeTourneau landing south of Vicksburg to discharge passengers.

By the end of the year, river levels in Vicksburg had returned to normal and cruise boats and industrial maritime traffic had resumed.

The mother and sister of an Alcorn State football player were among the four people killed in a head-on collision on Sept. 24.

Kamille H. Smith of Cleveland, 43, and 16-year-old Kirstin A. Lucas were the mother and sister of Alcorn State defensive lineman Tyler Smith. They were heading home from Saturday’s game against Arkansas-Pine Bluff in Lorman when the wreck occurred at the Warren-Issaquena county line on U.S. 61 North.

A former Vicksburg High School football coach went viral and lost his job after he was involved in a fight in the bleachers during a game in August.

Jimbo Nowell, the football head coach at Heidelberg High School and a former VHS assistant, was sitting in the stands scouting an early-season game between Quitman and Wayne County when he got into a shouting match with a fan.

Nowell got out of his seat and charged down the steps toward Jonathan Dearman of Waynesboro. The two threw punches at each other and Nowell got the worst of it. He came up from the fracas with a cut on his forehead.

Several other fans at the game took video of the incident and posted it to social media. The incident quickly went viral, with several national news outlets picking up the story.

In September, Nowell and Dearman dropped simple assault charges they had filed against each other, although Nowell was fined a total of $665.50 by the Wayne County School District police for two charges of profanity and disturbing the peace.

Nowell had previously worked at Vicksburg High School in 2020 as an assistant on the football staff and the head coach of the powerlifting team. He led the Gators to the MHSAA Class 5A powerlifting championship in 2021.