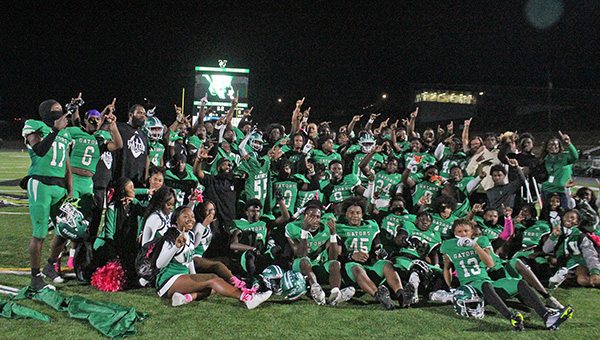 The Vicksburg Gators pose for a team photo afer beating Neshoba Central in October to win the MHSAA Region 2-5A championship. It was Vicksburg's first region title since 1990. (Ernest Bowker/The Vicksburg Post)

The year in review edition is a New Year’s weekend staple for news outlets all over the country. We in the business like to package it as one last look back at the year that was, but our little secret is that it’s a way to put together a clip show package that lets us knock off a little early on New Year’s Eve.

It’s a quick and easy project, you see, to scan through each month’s headlines and pick out the major stories or trends from the past 12 months.

In evaluating the sports news of 2022 in Warren County, it was hard to define a single story that stood out from the rest. It felt like the biggest trend was that there were no giant, earth-shattering stories whose effects will last for years. The biggest local stories in 2022, both on the field and off, flowed from the daily routine of the sports world.

Vicksburg High’s football team won its first region championship in 32 years and reached the MHSAA Class 5A semifinals for the first time since 2001.

Earlier in the year, Porter’s Chapel Academy’s boys’ basketball team reached the MAIS semifinals for the first time since 2013.

There was a change in leadership in the Vicksburg Warren School District’s athletics department, as longtime athletic director Preston Nailor left for a new job in July and James Lewis replaced him in August.

Similarly, we had some turnover within our local high school basketball programs. Warren Central, St. Aloysius and Porter’s Chapel Academy all made coaching changes.

One intriguing story hasn’t really happened yet. The Mississippi High School Activities Association’s realignment plan for 2023-25 added a seventh classification and brought Vicksburg High and Warren Central into the same region for the first time in 10 years. That won’t take effect until next August, though.

On the whole, it was a quiet year for Warren County sports — especially considering the considerable attention Mississippi received on the national stage.

Jackson State football coach Deion Sanders used his celebrity status to shine a light on his university and HBCUs before departing to lead Colorado’s program.

During the summer, Ole Miss’ magical run to its first NCAA baseball national championship brought the state together. Fans flocked from all over Mississippi — including dozens from Vicksburg — to Omaha for the title-clinching win vs. Oklahoma.

Along the way, the Rebels won a super regional series in Hattiesburg against Southern Miss. The series was a showcase for college baseball, with raucous sellout crowds and a national television audience, and became a highlight in the history of both programs.

Those state-level stories all touched fans here in Warren County. Mississippi is one big small town, after all, and people here follow the state’s college teams as closely as they do the area’s high school teams.

Locally, though, it was a fairly quiet year on the sports scene ­— and that’s not necessarily a bad thing. No news isn’t always bad news. There’s a reason the phrase “may you live in interesting times” is often viewed as a curse.

Frankly, after the past couple of years that included a global pandemic and the virtual shutdown of all sports for several months, we could all do with a little bit of peace and quiet.