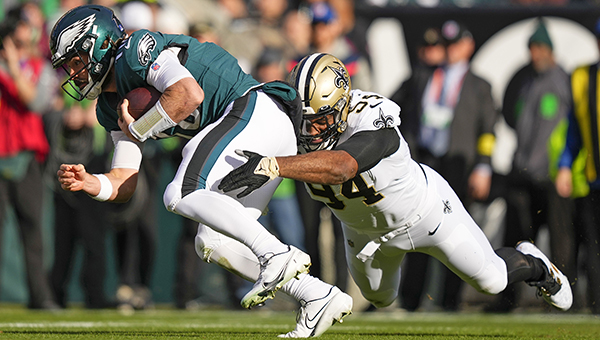 The total was a big one: Jordan is now the Saints’ career sack leader with 115 1/2, a number that seemed unlikely when he had one sack as a rookie in 2011.

Jordan got his. The Saints won’t get a chance at the playoffs after Green Bay knocked off Minnesota and eliminated them from an NFC wild-card spot.

The Saints beat the Eagles 20-10 but were eliminated from the NFC South title race when Tampa Bay rallied to beat Carolina. The victory temporarily put a wild list of scenarios in play for the Saints to make it as a wild card, but the Packers’  41-17 rout of the Vikings in the late-afternoon window ended those long-shot hopes.

The Saints (7-9), though, showed plenty of moxie in coming to Philadelphia and beating the 13-win Eagles — though star QB Jalen Hurts was sidelined for the second straight game with a sprained right shoulder.

New Orleans has showed no quit under first-year coach Dennis Allen. The Saints beat Atlanta two weeks ago and then refused to fold after falling behind by two scores last week at Cleveland during the coldest game in franchise history (9 degrees). The Saints scored 17 straight points and made a game-saving defensive stand at the end of that one to win consecutive games for the first time this season.

Now make it three in a row.

“I’ve been saying that the last few weeks, we have a gritty, tough group and there’s a lot of fight in those guys in the locker room and they continue to do that,” Allen said.

Jordan led a Saints defense that sacked Minshew six times and never allowed the Eagles to make a serious rally as they played with the No. 1 seed in the NFC at stake. Philadelphia has already clinched a playoff berth and can still earn the No. 1 seed by beating the New York Giants in Week 18.

The Saints tried their best to make next Sunday’s finale at home against Carolina mean something.

“We set out three weeks ago that we wanted to try to go 4-0 and that’s all we could really control,” Allen said. “We’ve been able to get three of them and we’ve got another tough opponent next week.”

Jordan was fined earlier this season after the NFL concluded that he faked an injury in the fourth quarter of New Orleans’ 17-16 loss at Tampa Bay on Dec. 5. The Saints also were fined. Jordan and the team denied any wrongdoing.

But there’s no doubt about the numbers Jordan has amassed over a career spent entirely with the Saints. He jumped from one sack as a rookie to eight, and then to 12 1/2 in 2013. He had a career-best 15 1/2 in 2019 and his three Sunday moved him past Hall of Famer Rickey Jackson, who had 115.

“Granted, it was against Gardner Minshew and not Jalen Hurts,” Jordan said.

Jordan even realized what Philly found out the hard way: Minshew is no Hurts. The Mississippi native, making his second start in a row, was 18-of-32 passing for 274 yards, with one touchdown and one interception. His touchdown pass covered 76 yards to another Mississippian, A.J. Brown, and cut it to 13-10 late in the third quarter. Minshew’s interception, however, was returned 12 yards by Marshon Lattimore for a game-clinching interception with 5:27 left in the fourth quarter.

The Eagles were shut out in the first half for the first time this season, and their 10 points was a season low. They didn’t get a first down until 12 seconds remained in the half.

Andy Dalton, who threw for 204 yards, completed his first 13 passes, including a 58-yard reception by Rashid Shaheed. That play set up one of two field goals by Wil Lutz in the first half. Taysom Hill had a 1-yard TD run for New Orleans, which led 13-0 at halftime.

“I think if you just look at our season, we have had games similar to the last couple, but we haven’t been able to finish them,” Dalton said. “The last several games we had we have been able to find ways to win. I think that’s one thing when you look at our season, we are going to look back at several games and say, ‘Man if we would have done one or two more things then the record could look a lot different.’”