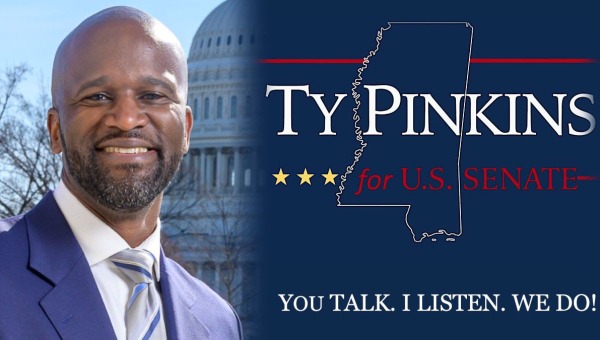 Although the qualifying period for the 2024 election doesn’t begin until next year, Pinkins said Tuesday he chose to announce his candidacy early and get a head start on campaigning. A campaign event in the Vicksburg area will be announced this month, he added.

In a news release announcing his candidacy, Pinkins stated he has 21 years of leadership experience as an Army Warrant Officer, including service in the Obama and Trump Administrations with the White House Communications Agency, and several years in the non-profit and public interest sector.

“I am excited to announce my candidacy for the U.S. Senate,” Pinkins said. “I am running because I am concerned about the direction in which our country is going. Inflation is making life more expensive for Mississippians; women’s reproductive rights are under attack by politicians and unelected judges; and our very democracy is being threatened by those who wish to tear down the institutional safeguards provided by our Founding Fathers that have guided us for centuries.”

Pinkins said the three main issues that motivated him to run for office are the economy, health care and education.

“Raised in the Mississippi Delta, sometimes in a home without a bathroom, the oldest of four children, I grew up knowing the value of hard work, and also knowing how important every dollar was for a family living in poverty,” Pinkins said in his announcement. “My family depended on food stamps, struggling to survive on my father’s salary from driving a tractor. My parents did their best to support their children and teach us the value of hard work.”

Pinkins said he chopped cotton in his teenage years to help his family make ends meet.

Now, as a veteran, lawyer, and community organizer in the Mississippi Delta, Pinkins said he works to ensure Mississippians have access to quality jobs that pay well.

“That’s why I stood up for workers facing discriminatory wage practices that cheated them out of their hard-earned pay for decades,” Pinkins said.

Working for the Mississippi Center for Justice, Pinkins helped recover more than $1 million in wages that Mississippi workers had been underpaid by employers violating Federal law.

Pinkins is a graduate of Rolling Fork High School and attended Tougaloo College before joining the Army. While on active duty, he earned his undergraduate degree from the University of Maryland’s Global Campus. Years later, he attended law school using the GI Bill, graduating from the prestigious Georgetown University Law Center and earning a Master of Law degree in National Security Law.