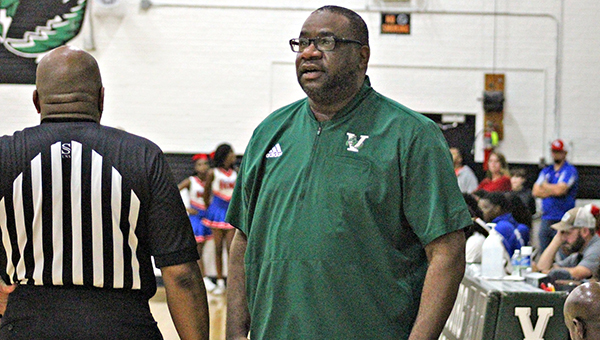 Vicksburg High boys basketball coach Kelvin Carter talks to an official during a game earlier this season. Carter led the Gators to a 73-60 victory over Callaway on Tuesday for his 100th career victory. (File/The Vicksburg Post)

Kelvin Carter’s 100th victory as Vicksburg High’s boys’ basketball coach was even sweeter because of who it happened to come against.

Davian Williams scored a game-high 20 points, and Vicksburg stayed a step ahead of Callaway all night to win 73-60 in its MHSAA Region 3-5A opener on Tuesday.

Vicksburg has only beaten Callaway twice since the start of the 2010-11 season, with the last victory coming in 2019.

“It’s super duper gratifying, especially considering Callaway has pretty much whupped up on us for a lot of years,” Carter said. “The guys played hard and it was a basketball environment. We fought to the end. It was gratifying.”

Williams scored 11 of his 20 points in the first quarter as the Gators got out to an early lead and never let it go. They expanded a five-point lead to 12 by the end of the third quarter and maintained it in the fourth.

Kedarius Wade led Callaway with 17 points and Treivon Taylor had 15.

“We just kept control of the game and that right there is very motivating mental-wise,” Carter said. “Normally when we’ve gotten in those situations in the past, we’ve folded. This time they were convinced we had control of the game from the second quarter on.”

Carter added that beating Callaway was more than just another win, even beyond his personal milestone.

“I think it was a big statement game,” Carter said. “First of all, it was the first district game and it was at Callaway. It really jump-started district. We’ve got Provine on Friday which I think is the team to beat in JPS in our district. It was a mental hurdle because we’ve had that Callaway bug.”

Vicksburg plays at Provine Friday at 6 p.m. in another Region 3-5A matchup.

Clinton trailed by three points after the first quarter, but outscored the Vikings 20-11 in the second to take the lead for good. The Arrows also held Warren Central to just five points in the fourth quarter.

Tyler Nichols added 14 points for Clinton and Corren Redd had 13.

Mack finished with a game-high 34 points and 10 rebounds, and Selby had 31 points, 11 rebounds and four assists. Mack made four 3-pointers in the second half and had 14 points in the fourth quarter. He was 10-for-12 from the free throw line in the game.

PCA will play at home Thursday at 6 p.m. against Deer Creek.

Vicksburg jumped out to an 11-point lead at the end of the first quarter, then struggled to pull away. It was outscored 34-23 in the second half, but managed to hang on.

It was the first time since 2019, and only the second time since 2006, that Vicksburg’s girls and boys’ teams beat Callaway in the same doubleheader.