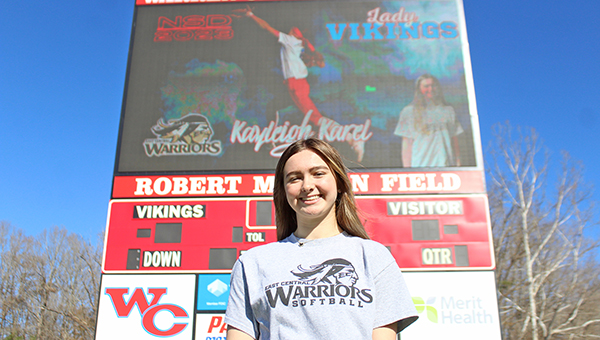 When Kayleigh Karel was a freshman, Warren Central softball coach Dana McGivney said, she was already showing the potential to play in college.

“Just her determination, and how hard she worked and wanted to improve. And then how much she improved from year to year,” McGivney said. “You could just tell she was going to be someone who should be at the next level.”

“Exciting. I’m very excited to start this new chapter in my life,” Karel said. “I’m very grateful for it, because not many people get this opportunity.”

Karel started playing softball when she was 6, and said playing in college has long been a goal. She’s heading into her third year as a starter for Warren Central and has also played on a number of tournament teams.

She got on East Central’s radar by attending camps and showcases. They started recruiting her in 2021, and she picked them over Meridian and Holmes Community Colleges.

“I went to camps and showcases, and then they came and watched me play and I contacted them,” Karel said. “I had an instant connection with them, and they were very nice and welcoming whenever I first met them. The campus was nice and it felt like home.”

Karel has a modest .248 batting average in four varsity seasons, but McGivney called her one of the best defensive center fielders she’s coached in 16 seasons at Warren Central.

“I’ve had several really good ones and she’s right up there at the top with them. Defense is probably her strong suit, but she does a good job at the plate as well,” McGivney said.

Karel has also showcased her all-around athletic ability away from softball. She’s been part of Warren Central’s girls’ basketball team since she was in seventh grade, and is enjoying a breakout senior season as a sharpshooting guard.

“I like being a multi-sport athlete. I build more connections with more people and have softball and basketball friends,” Karel said.

Her friends from both sports attended Wednesday’s signing ceremony in Warren Central’s football fieldhouse. They posed for pictures with Karel and shared some laughs as they all celebrated a life milestone together.

The camaraderie and friendships, Karel said, is what she most enjoys about softball and sports in general.

“I like being on the field with my teammates,” she said. “Whenever I’m on the field I don’t think about anything else. It’s a relief and a breath of fresh air. It’s like a home away from home.”