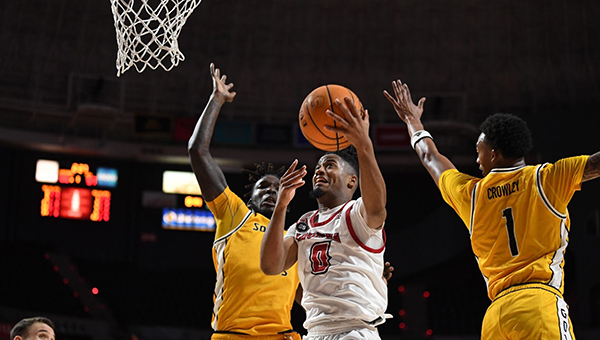 Kentrell Garnett and Themus Fulks each posted career-highs in scoring, combining to go 14-for-19 from the field, and Louisiana-Lafayette led from the opening tip to the final buzzer in beating Southern Miss 75-61 on Thursday.

Louisiana started the game with a 14-4 run and never trailed. Another 11-0 run late in the first half gave it a 14-point halftime lead, and Southern Miss never got closer than seven points in the second half.

Louisiana was 14-for-27 (51.8 percent) from the field overall, and made seven 3-pointers in the first half. It shot 50 percent for the game.

Southern Miss shot just 7-for-26 (26.9 percent) from the field in the first half. DeAndre Pinckney led the Golden Eagles with 21 points and 13 rebounds for his fourth double-double of the season. Austin Crowly added 14 points, and Felipe Haase scored nine.

Southern Miss (13-3, 2-1) had a two-game winning streak snapped in the first of four consecutive road games. It plays at Louisiana-Monroe Saturday at 2 p.m.

Southern Miss is 10-0 at home and on neutral courts this season, but only 3-3 in true road games.