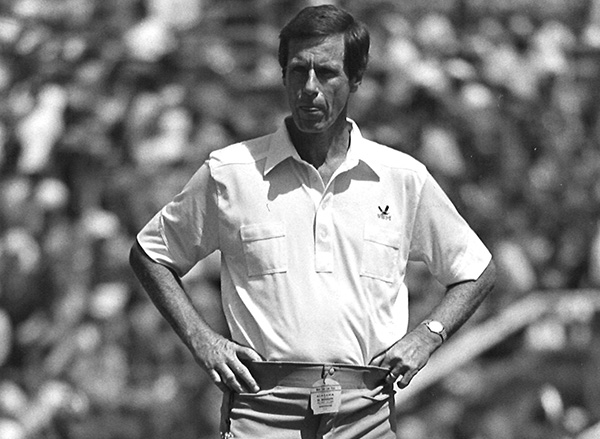 Former Southern Miss football head coach Jim Carmody, who was part of one of the best era's in the program's history in the 1970s and 80s, died Thursday, the university announced. He was 89. (Southern Miss Athletics)

HATTIESBURG — Former Southern Miss football coach Jim Carmody, who was a key part of one of the best eras in the program’s history during the 1970s and 80s, died Thursday, the university announced. He was 89.

Carmody was born and raised in New Orleans, played college football at Tulane, and coached with eight college and two NFL teams. He made his biggest mark, however, with Southern Miss from 1978-87.

As defensive coordinator during the first half of his tenure, Carmody was the architect of what became known as “The Nasty Bunch” defense.

From 1978-80, Southern Miss had a 22-11-1 record and held 22 of its 34 opponents to 16 points or less. The defense earned its “Nasty Bunch” nickname by playing — and hitting — harder than its opponents. Carmody, as its leader, had the nickmane “Big Nasty” from his players.

“The Nasty Bunch” has since become synonomous with Southern Miss’ defense.

Carmody went to the NFL in 1981 as the Buffalo Bills’ defensive line coach, but returned to Southern Miss as head coach in 1982. Over the next six seasons he compiled a 37-29 record. Southern Miss ended Alabama’s 56-game winning streak in Tuscaloosa with a 38-29 upset in 1982.

Carmody’s defensive units finished in the Top 10 nationally in total defense in four of his nine seasons with Southern Miss.

After leaving Southern Miss, Carmody coached another 18 years as an assistant with Mississippi State, Ole Miss, and the NFL’s Arizona Cardinals.

Carmody was inducted to the Mississippi Sports Hall of Fame in 2009. He is also a member of the Southern Miss M-Club and Copiah-Lincoln Community College Halls of Fame.