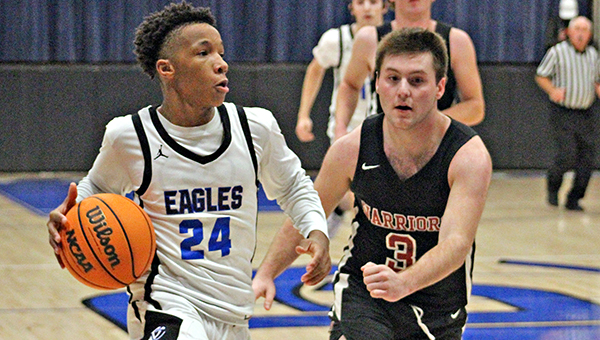 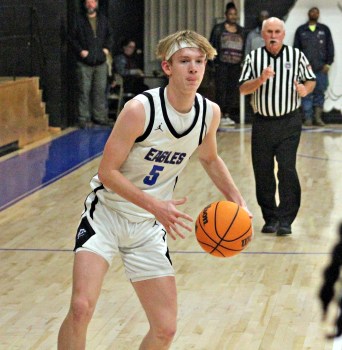 Porter's Chapel Academy's Lawson Selby (5) handles the basketball along the perimeter against Deer Creek. Selby had 20 points and 12 rebounds to lead PCA to a 53-46 victory. (Ernest Bowker/The Vicksburg Post) 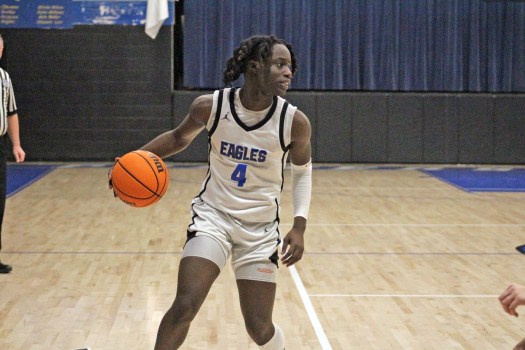 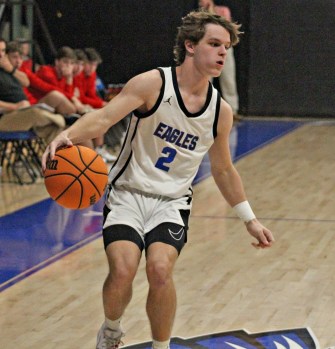 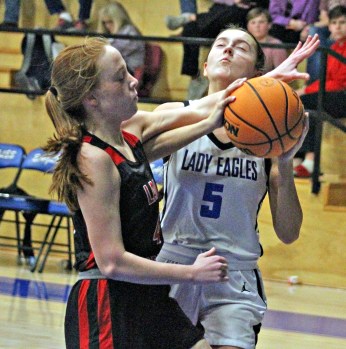 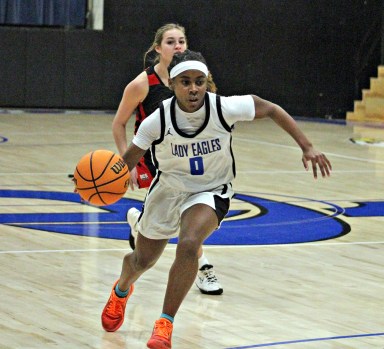 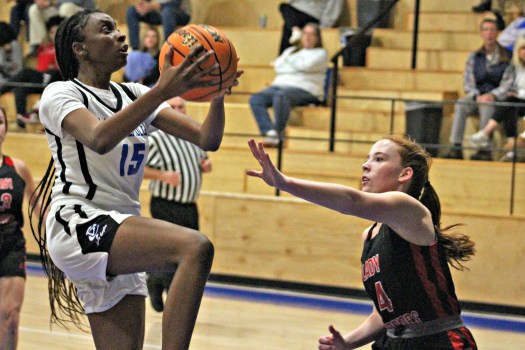 Porter’s Chapel Academy was cruising toward a comfortable, if lackluster, victory Thursday night when it suddenly found itself having to put in some work to close it out.

Lawson Selby scored a game-high 20 points, including three clutch free throws in the final 24 seconds, as Porter’s Chapel held off a late charge by Deer Creek to win 53-46 in a boys’ basketball game.

Selby also had 12 rebounds to finish with his second consecutive double-double. PCA led by double digits for most of the second half, then let Deer Creek back in the game in the final four minutes before hanging on.

“We started making silly plays. We quit playing together and we just let them get back in the ballgame,” PCA coach Casey Fisher said. “(Deer Creek) didn’t quit. I could tell they were gritty. But we played well enough to win, and that’s all I can say. We won.”

Selby’s reverse layup in the final seconds of the first half put PCA ahead 33-22, and it kept the lead in double digits for the next quarter and a half. Deer Creek did not get it back under 10 until making a basket with 3:20 to go, then made a charge down the stretch to make things interesting.

Kilgore converted a three-point play and Brackeen hit a long jumper as part of a 10-1 run that pulled Deer Creek to within 50-46 with a minute to go.

The Warriors, though, lost their momentum after that. They missed three shots in the final minute, and Selby made three of four free throws for PCA.

After Selby’s one miss, Mack grabbed the rebound and the Eagles passed the ball around to burn off 17 of the remaining 24 seconds. Selby was eventually fouled with 7 seconds left and sank two free throws for the final 53-46 margin.

However they play, the Eagles are taking on the look of a very good team and will have the chance to prove it during a grueling stretch next week. They’ll play four games in five days beginning Monday night at home against Sharkey-Issaquena Academy.

After that, road trips to Manchester Academy on Tuesday and Deer Creek on Jan. 13 bookend a showdown with Greenville Christian at home on Jan. 12.

“Greenville Christian is the No. 1 team in 3A and they come here. If we can win these games next week and get them here, it puts us in a different perspective as far as Porter’s Chapel basketball and 3A,” Fisher said.

Girls
Porter’s Chapel 70, Deer Creek 20
Tiara Sims racked up 31 points, Hannah Henderson had a double-double with 14 points and 10 rebounds, and the Porter’s Chapel Academy Lady Eagles had no trouble picking up a district win over Deer Creek.

Fisher, though, had some of his highest praise for Henderson’s efforts both scoring and rebounding the basketball.

“Hannah stepped up tonight. She really played well. She’s been practicing well, she’s been rebounding and being long. I keep telling her she’s our Dennis Rodman,” Fisher said, referring to the former NBA star who was one of the league’s best rebounders in the 1990s.

PCA got a balanced effort across the board — which it needs, since it only has five varsity players. The Lady Eagles have eight junior high players in grades 7-9 who provide valuable minutes as substitutes, but because of MAIS rules can only play two quarters in the varsity game.

“We have five varsity girls and they play well together,” Fisher said. “I have to use a lot of timeouts and we have to use our JV girls real wisely. I get them for two quarters, and once you take them out and put them in that’s it.”