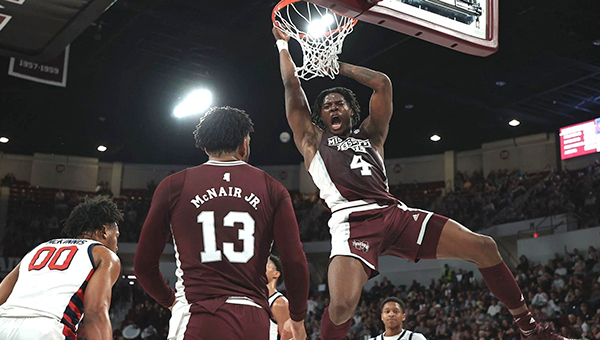 STARKVILLE — Mississippi State needed a win about as badly as any team could in the first week of its conference schedule, and went out and got it.

Will McNair Jr. scored a season-high 13 points, Tolu Smith added 12, and Mississippi State warmed up in the second half to beat Ole Miss 64-54 on Saturday in a battle of two slumping Southeastern Conference teams.

The Bulldogs (12-3, 1-2 SEC) snapped a three-game losing streak that included their first two conference games, and that came after they started 11-0.

“Our backs were against the wall,” Mississippi State coach Chris Jans said. “We had to win, plain and simple.”

Ole Miss (8-7, 0-3) remained winless in the SEC and lost its fourth consecutive game overall. The Rebels led by seven points with 12:43 left in the game and then made just 6 of 18 shots the rest of the way.

Mississippi State heated up at the same time the Rebels were going cold. A 3-pointer by Eric Reed Jr. triggered a 16-3 run that put the Bulldogs ahead 47-41 with 7:42 remaining, and they never trailed again.

Another 8-0 run a few minutes later, capped by a dunk from Keshawn Murphy with 1:22 to go, extended the lead to 59-46 and effectively sealed the game.

“Basketball is a game of runs and that was a big shot for me and a big shot for our team,” Reed said of his 3-pointer. He finished with nine points and eight rebounds. “The crowd erupted. I couldn’t even think.”

The Rebels’ leading scorer, Matthew Murrell, didn’t get his first bucket until a layup at the buzzer in the first half got the Rebels within three. He shot 6-of-9 in the second half and finished with 19 points. Jaemyn Brakefield added 10 points and Myles Burns grabbed 10 rebounds.