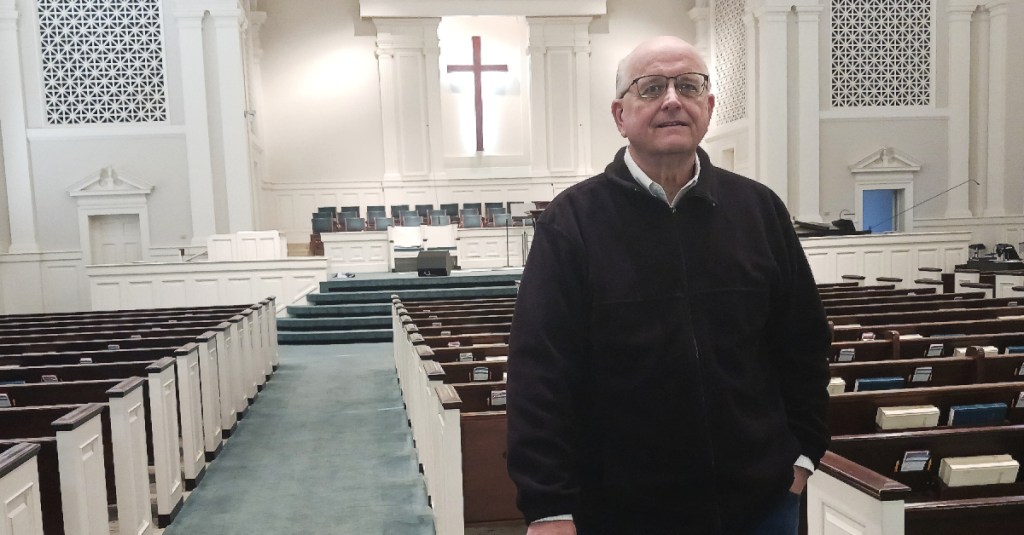 Dr. Matt Buckles is retiring as pastor of First Baptist Church. He announced his retirement on Jan. 1 during Sunday service. His last day is Jan. 31. (Photo by John Surratt)

It marks his final day after 18-and-a-half years as pastor of First Baptist Church.

“I’ve had a great ministry here,” he said, adding the idea of retirement entered his mind when he turned 65 in 2022.

“It just gets on your brain. This year, I turned 66 and my wife and I began serious prayer and consideration of when’s the right time to announce our retirement, and we felt in mid-November that January was the month.”

On Jan. 1 he announced his retirement.

“We felt like a month was a good transition,” Buckles said.  He and his wife Karen will move to Madison to be close to their children and grandchildren.

First Baptist, he said, will remain in good hands.

“We’ve been blessed to have a strong staff and strong leadership; when I walk out the door, they’ll keep going,” Buckles said.

Buckles’ retirement marks a change in a career that began when he was growing up in Franklin County.

“When I was in high school, I sensed God wanted me to preach; to be a minister of the Gospel. In my little world, it was to be a preacher,” he said. During his freshman year at Copiah-Lincoln Junior College, he said, “I struggled internally with God’s call on my life to be a minister, a preacher.

He and his wife graduated from Mississippi College in 1978 and moved to New Orleans, where Buckles attended the New Orleans Baptist Theological Seminary for three years and graduated with a master’s of divinity. During that time, his wife taught at John Curtis High School and then at Gainous High School.

“The church is on the campus of Blue Mountain College, one of the three Baptist colleges related to the Mississippi Baptist Convention,” Buckles said.

During his tenure as pastor, Buckles was encouraged by the school administration to return to school, where he received a doctor of ministry degree in 1989.

It was also during this time that he and his wife began thinking about their ministry.

“For about a year, my wife and I knew there was something next in our ministry,” he said. “We didn’t feel like it was local church pastoring anymore, and we had extensive conversations with the International Mission Board of the Southern Baptist Convention and we felt like maybe we were being called to international missions.

“But after a series of conversations and tests, they wrote me a nice letter that said, ‘Dr. Buckles, you love missions but we don’t believe you are called to missions.’”

One month later, the Mississippi Baptist Convention Board in Jackson called and employed him in the church administration department, where he served for 14 years.

“Church administration covered all the work of the pastor’s life, the church staff, legal issues, church facilities and committees in the local church,” he said.

“I would preach somewhere every Sunday — an interim, or supply minister,” he said.

It was during his final year with the state convention, Buckles said, “I got the itch to be a pastor again. We didn’t tell anybody; just my wife and I prayed.”

First Baptist Church received his name in the spring of 2004. In a bit of irony, Buckles visited First Baptist in February 2004 to lead a Saturday morning conference for the church deacons.

“They called me as their pastor on Father’s Day 2004 and I started a week later, on June 28. My son was a junior at Ole Miss and my daughter had started Samford in Birmingham, Ala., so they didn’t grow up here, but they adjusted well to the city.”

Buckles said he has seen many changes at the church and in the world during his time as pastor.

“In my years here, obviously COVID affected everything. Our lives are divided into pre-COVID and post-COVID,” he said. “That brought about changes good and bad.”

While the church developed the ability to live-stream its services to reach people, he said, COVID affected attendance at services and activities and they have not returned to the pre-COVID levels.

“We judge this time by COVID just as we did with Katrina during my first years,” he said. Buckles said First Baptist was involved in a three-year rebuilding program helping people on the Mississippi Gulf Coast recover from Katrina.

“We also remodeled the Mafan Building, so at the beginning of my ministry we had two great opportunities for church involvement and we’ve benefitted from those early decisions,” he said.

On a broader plane, Buckles said people today seem to be more distracted than before.

“In a general sense in my years in ministry and since I’ve been here, it appears to me that Christians are distracted; there are more things to do, more places to go; they don’t have to be here (church) every Sunday,” he said. “That is concerning. It is a shift in the culture.”

He said there also seems to be a broad shift in culture away from the Judeo-Christian conscience, where people seem more willing to accept things of questionable moral and ethical value.

“I’ve seen Christians compromise — denominations, groups, individuals compromise,” he said. “It’s very troubling, very troubling that something that’s blatant in scripture — (written in) black and white — all of a sudden we want to pad it out to 50 shades of gray.”

Buckles said he has also seen these cultural shifts affect families “from strong families to families that are struggling, and yet our church has been very involved in foster care ministry and become leaders in it.”

He added some church members have been active in the Court Appointed Special Advocate, or CASA, program in Warren County Juvenile Court.

Buckles said he will miss the daily relationship he formed with the church staff and the friendships that have developed over the years through church programs and weddings and baptisms, and the joy of watching young families grow in the church.

But Buckles said his time in retirement won’t lie idle.

He is awaiting the publishing of his book, “The Right Hand of God for Times Like These,” working on mission trips and helping establish new churches.

“The focus will be the church world,” he said. “That’s what I know, that’s what I’m called to do.

“There’s a lot to do in retirement; it’s just another chapter.”