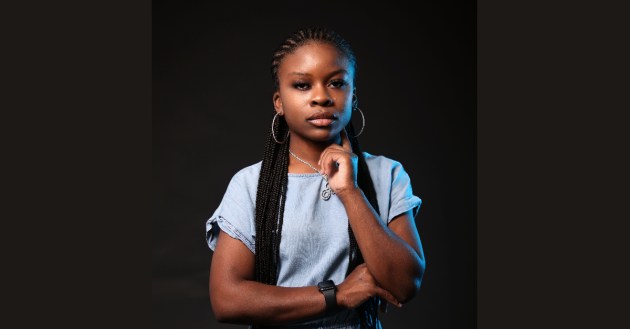 Addison Anderson, 14, defied the odds and cheated death following a near-fatal car wreck in 2021. (Photo by Larry Walker | Special to The Vicksburg Post) 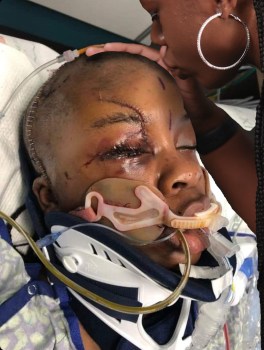 Addison Anderson in recovery after a near-fatal car accident in 2021. (Photo Courtesy of the Anderson and Flaggs families) 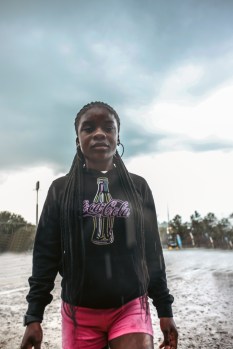 Anderson in a photo taken by Larry Walker.

Addison Anderson’s life was certainly not a tangled mess.

Things were going well, and she had family and friends who loved her. However, like many teens who are coming of age, Anderson did experience a bit of apprehension when it came to how her peers perceived her appearance. And for the then-13-year-old, it had been all about her hair.

“My hair was me. It was like the only thing I cared about: hair, hair, hair. If my hair wasn’t right, I wasn’t going anywhere and if my hair didn’t look how I wanted it, I was upset. Because my hair was my hair,” she said.

But that changed after Anderson suffered a head injury from a car wreck and had to have part of her head shaved.

“I feel like it (losing my hair) taught me how to be humble, because you can have something today and lose it tomorrow and you just have to be blessed for what you have,” she said.

And in Anderson’s case, that blessing was surviving a near-fatal car accident.

On Aug. 21, 2021, Anderson along with her mother, Emmarie Flaggs, were driving home from a family birthday party when Flaggs swerved to keep from hitting another car. This, Anderson said, then caused their car to run into a ditch and hit a fence.

“We hit a gate when we swerved trying not to hit the back of another car, and a pole that was connected to the gate hit my forehead,” she said.

Anderson was taken to the University of Mississippi Medical Center, where she underwent surgery to repair what she called “a piece of my brain,” that had been dislodged. During the surgery, she said, “some type of mesh or something” was used to secure this displaced piece of skull.

Anderson remained in the ICU following the surgery but was eventually moved to a regular room.

It was then she said that she began to ask questions.

“When I first woke up, I wasn’t aware of where I was, because I was under medicine and I didn’t know what was going on, and I asked how I got in the hospital,” she said.

To protect her daughter, Anderson said her mother did not initially tell her what was happening.

“She didn’t want to put pressure on my brain since I just had brain surgery,” she said.

But when Anderson’s mother finally did tell her what had happened, she began “putting the pieces together” — remembering the accident and being taken away in an ambulance.

Anderson said she had also been inquisitive as to her appearance after the accident and surgery.

She knew something was amiss when a nurse routinely came into her room to check her head.

And she was right, something was going on with her head. The surgeons had to cut her scalp from ear to ear to perform the surgery. Staples had been used to suture it back and the nurse was checking on the healing progress after they had been removed.

After her constant pleading to see how she looked, Anderson was given a mirror.

Not all was gone, she said, “Just the top part of my hair was gone, but the back was still there, so I told my mom, ‘Just cut it all off,’ and she was like, ‘Are you serious?’  And I said ‘Yes,’ because I didn’t want to look funny with one piece of hair and the rest gone.”

Reckoning with the fact she was now bald was an emotional experience, Anderson said.

“It was like every day you wake up to brush your teeth and you have to see yourself in the mirror, so I was seeing myself in the mirror. I was going through not (necessarily) depression, but I was feeling like I wasn’t a girl anymore because I didn’t have hair,” she said.

Having no hair was not the only challenge Anderson would face following the car accident. Due to her head injury, she also had to have speech and physical therapy.

There was also recovery she had to endure from an eye injury she sustained in the accident.

Anderson said she was told she would be in the hospital for a year. But with determination and the love and support from her mother and grandmother, Linda Anthony, who stayed with her in the hospital and her grandfather, Mayor George Flaggs, Jr. who, though he was not allowed in the hospital due to COVID restrictions, came every other day to just sit in the parking lot so his granddaughter would know he was there to support her, defied the prognosis and came home two months following the accident.

Anderson admitted heading back to school after the accident and with no hair gave her pause.

“I thought people at school would be teasing me. But when I got back to school everyone was glad to see me and I was shocked because I got a reaction I wasn’t looking for, which was ‘I am happy to see you,’ and ‘We don’t care how you look, we are just glad you are here,’” she said. “That made me happy.”

Now a freshman at Vicksburg High School, Anderson is fully recovered. She is a member of the school’s Color Guard and track teams and is also sharing her experience with others.

“My story wasn’t for me,” she said. “It was for me to do what God wanted me to do. I want them (those I speak to) to know God is real. Everything is God. Like even when you wake up in the morning, God is there. I feel like it (my accident) wasn’t a mistake and I’m not questioning God. At first, I was and asking God, ‘Why me?’ But when I started thinking, I thought everything is for a reason, so I feel like my reason or what I want the world to know about my situation is, God wanted me to stay humble and show the world that He is real.

“People thought I wasn’t going to wake back up, and doctors told me I couldn’t when I showed them I could,” she added. “I want people to know if you have a strong faith that anything is possible if you just believe.”

A video made by Larry Walker on Anderson’s near-death injury can be viewed below: