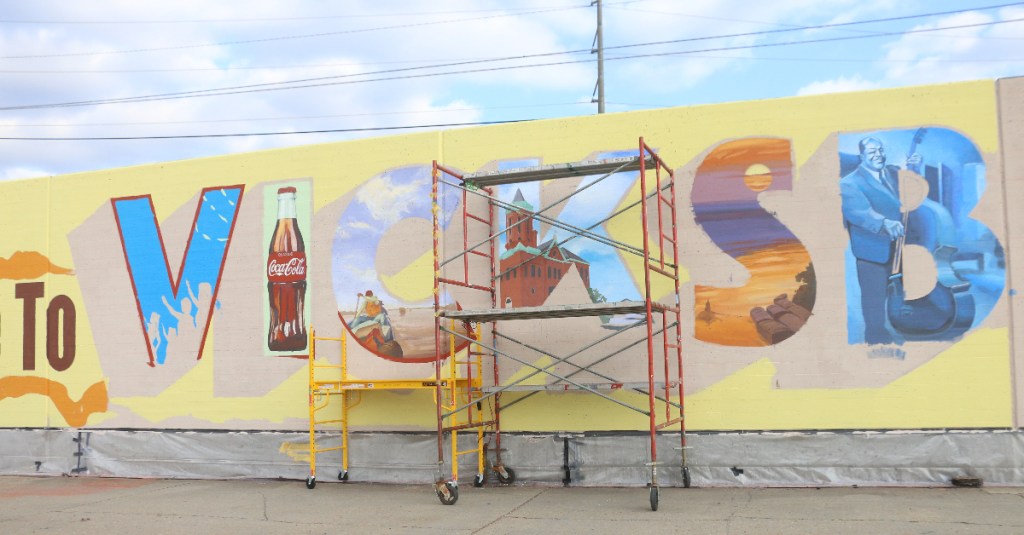 Work is underway on the city waterfront mural. The Downtown Vicksburg Main Street Program, the city of Vicksburg and the Vicksburg Convention and Visitors Bureau are funding the project. (Photo by Terri Cowart Frazier | The Vicksburg Post)

In November, preparations began for a project that will welcome all those arriving by boat.

For several years, Kim Hopkins, who serves as the executive director of the Downtown Vicksburg Main Street Program, said the idea to have a mural painted at the city waterfront has been in the making, and now with the combined effort of the city of Vicksburg, Main Street and the Vicksburg Convention and Visitors Bureau, it is becoming a reality.

Craig Thomas of Craig Thomas Art began working on a hand-painted mural inside the flood wall at the city waterfront at the end of December, Hopkins said.

“I’m very excited,” Hopkins said, in reference to Thomas beginning work on the mural. “This is something I have been wanting for a while and it is something that makes my heart happy every time I go down there.”

In coming up with the mural design, Hopkins said, she and VCVB Executive Director Laura Beth Strickland initially sent Thomas images for inspiration. From there, ideas were exchanged with Hopkins, Strickland and Thomas until a final image was designed.

“We sent him (Thomas) several pictures and he sent us back drawings, and then Laura Beth and I sat down one day and tweaked it and he just kept working with us until we got the work we wanted,” Hopkins said.

The total cost of the mural is $42,000, with Vicksburg Main Street and the VCVB each paying $7,000 for the startup. The remaining $28,000 will be funded by a grant from the city of Vicksburg.

Hopkins could not give a date the mural would be completed since the weather is a factor.

“It has to be a certain temperature for him (Thomas) to be painting,” Hopkins said. On humid days, the wall will “sweat,” she said.

“He (Thomas) could draw (when the weather is humid and the wall sweats), but he cannot paint,” she said.

Hopkins said Thomas has been easy to work with and is pleased with his work.

“He has been doing a great job,” she said.