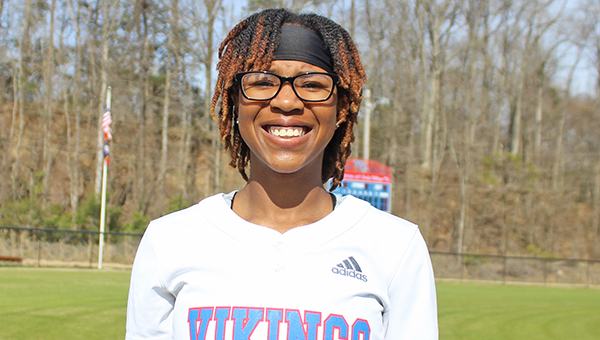 Warren Central basketball player Zion Harvey had 19 points and six steals in a 52-38 victory against Terry on Friday.

The second half is turning into go time for Warren Central’s girls’ basketball team.

The Lady Vikes won after trailing at halftime for the second game in a row, by holding Terry to 14 points in the final two quarters to surge to a 52-38 victory on Friday.

Ta’Miya Sims scored all 11 of her points in the second half to lead the Lady Vikes to this latest win, and also contributed nine steals.

Zion Harvey scored a game-high 19 points and had six steals for WC, while Jamaiya Sanders chipped in eight points and Jae’la Smith had seven.

Warren Central won for the fifth time in six games, with three of those coming on the road. It will return home Tuesday at 6 p.m., to face Northwest Rankin.

Vicksburg 67, Jim Hill 45
Janiah Caples finished with a game-high 20 points, six rebounds and four assists as the Vicksburg Missy Gators stayed red hot — and in first place in MHSAA Region 3-5A — by blowing out Jim Hill on the road.

Layla Carter added 19 points and four assists and JaNa Colenburg had 18 points and five steals for Vicksburg (19-4, 4-0 Region 3-5A), which raced to a 20-point lead by halftime and was never threatened in the second half.

The Missy Gators won their eighth consecutive game, which included three on the road against region opponents. They will return home to play Callaway Tuesday at 6 p.m.

Porter’s Chapel 68, Deer Creek 23
Tiara Sims had yet another big game, finishing with 29 points and four steals, and the Porter’s Chapel Academy Lady Eagles won their fifth consecutive game by blowing out Deer Creek on Friday.

Sims had her sixth consecutive game with at least 27 points.

PCA led by 23 points at halftime, and then outscored Deer Creek 26-5 in the third quarter.

Anjel Walton finished with 18 points — 11 of them in the third quarter — and seven steals for Porter’s Chapel (10-5, 5-2 MAIS District 3-3A). Hannah Henderson had 14 points and eight rebounds, while Sophie Masterson had five points and seven rebounds.

PCA can clinch the No. 1 seed in the District 3-3A tournament by beating Benton Academy on the road on Tuesday at 6 p.m.

Vicksburg (20-2, 4-0 MHSAA Region 3-5A) remained unbeaten in 2023 by winning its seventh game in a row. It reached the 20-win mark for the first time since the 2019-20 season and still has five regular-season games left on the schedule.

Noah Porter also scored 14 points for the Eagles, who were 14-for-21 from the free throw line.