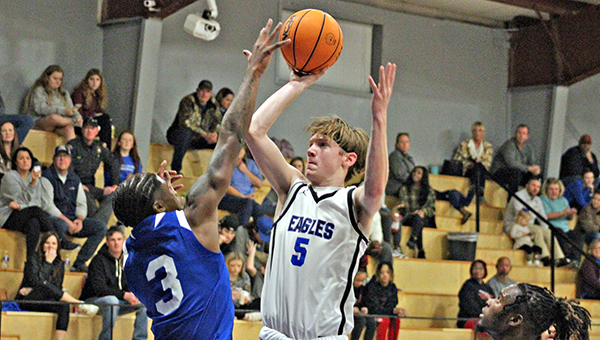 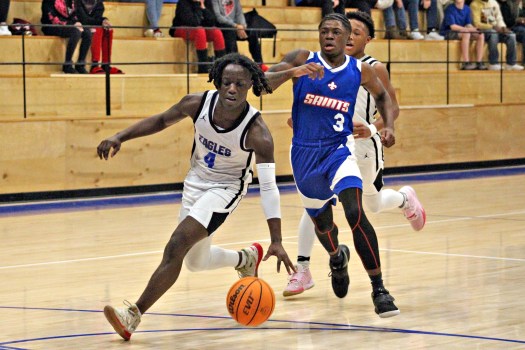 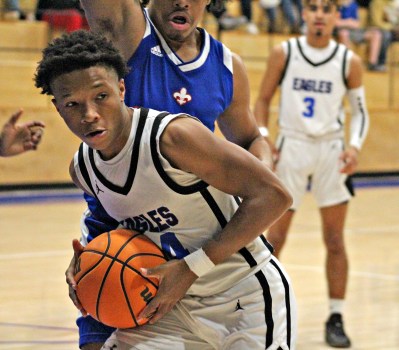 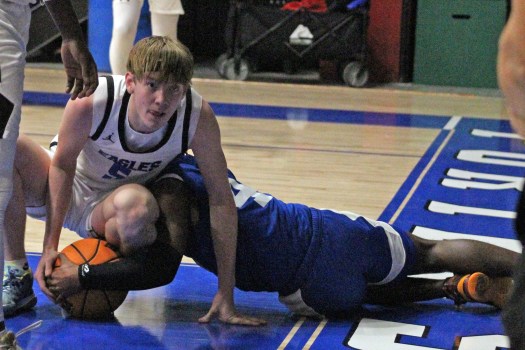 Porter's Chapel Academy's Lawson Selby (5) gets tied up with Greenville Christian's Tae Miles (4) under the basket in the first half of Thursday's game. (Ernest Bowker/The Vicksburg Post)

If things work out the way they hope, this was far from the last time Porter’s Chapel Academy’s boys’ basketball team will see Greenville Christian.

That didn’t make this meeting any less disappointing, though.

Greenville Christian took advantage of a cold shooting spell by the Eagles in the second half to gain some separation, and defeated PCA 60-48 Thursday in a match-up of the top two teams in MAIS District 3-3A.

“They’re athletic as all get-up. They ain’t No. 1 in 3A basketball for nothing,” PCA coach Casey Fisher said. “We were right there. They outrebounded us. We fell just a little bit short.”

This was the second meeting of the season between PCA and Greenville Christian, and it’s likely they’ll see each other again — possibly several times — in the postseason.

“We’ve got to take care of business as far as district-wise. If we can close out the season we should be in good shape going into the district (tournament),” Fisher said. “They beat us by two at their place, and we had them. Tonight we fell just a little bit short. We’ve played a lot of basketball this week, too.”

PCA and Greenville Christian traded baskets and the lead for the first 2 1/2 quarters. Neither team led by more than four points until the middle of the third quarter, when PCA suddenly went cold and the Saints went on a 12-2 run to open a 41-30 lead.

Porter’s Chapel put together a run of its own in the fourth quarter, ripping off 10 consecutive points to get back to within 48-44 with about four minutes to go.

The cold shooting quickly returned, though, and Greenville Christian closed the game on a 12-4 run to seal it.

“They did what good basketball teams do,” Fisher said of Greenville Christian. “They made shots. (Rhodes) went to the basket. They’re very, very athletic.”