Mississippi State introduces Zac Selmon as next Director of Athletics 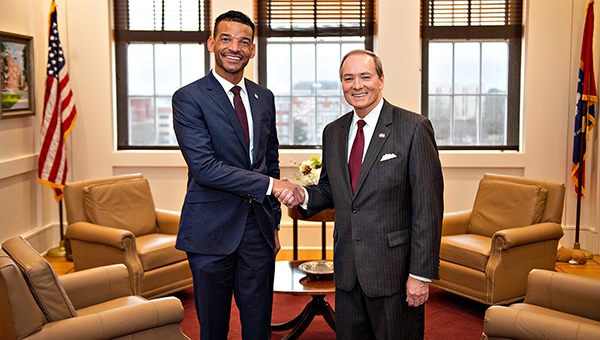 STARKVILLE — Mississippi State’s new Director of Athletics has a famous name, a growing reputation in athletic administration, and a long history of community service.

Zac Selmon, a son and nephew of the famed “Selmon Brothers” who starred in football at the University of Oklahoma and in the NFL, was introduced as the next leader of Mississippi State’s athletics department on Friday.

Selmon played football at Wake Forest and has worked in the athletics departments at Oklahoma and North Carolina. His father, Dewey, played six seasons in the NFL with the Tampa Bay Buccaneers and San Diego Chargers and his uncle Lee Roy Selmon is in the Pro Football Hall of Fame.

“This is an incredibly exciting opportunity and a professional journey that I’m ready to begin,” Selmon said. “I want to thank Dr. Keenum for his confidence in me. I’m grateful to my family for preparing me from an early age to work hard and trust in God.”

“We’ve talked about the Selmons and their great football legacy. Zac’s experience as a successful student-athlete at Wake Forest is an important component as is his relevant athletics administration experience,” Keenum said. “But I think my focus during the interview process was how seamlessly Zac’s values of family, faith and character align with those of Mississippi State University.”

Before that, as Oklahoma’s senior associate athletics director for administration and development for five years, Selmon led the fundraising strategy for OU Athletics’ $200 million capital campaign.

Prior to working at Oklahoma, Selmon was the associate associate athletics director at North Carolina.

Keenum also praised Selmon’s charity work. Selmon and his sister Shannon are co-founders of the Shine Foundation, a non-profit organization dedicated to serving those in need, especially children, at home and abroad.

“In seeking a new Director of Athletics, we talked with some of the nation’s very best athletics department administrators,” Keenum said. “After an extensive review of those outstanding candidates, I am convinced that in Zac Selmon we found an outstanding leader with a servant’s heart — a leader who has extensive experience at two Power Five universities and who understands and shares our relentless commitment to achieving and maintaining excellence in our Bulldog athletics programs — all of them.”

“The continued success MSU has enjoyed during the search would not have been possible without the steady hand, hard work and wisdom of Bracky Brett,” Keenum said. “Our university, our fan base, owes you a tremendous debt of gratitude.”