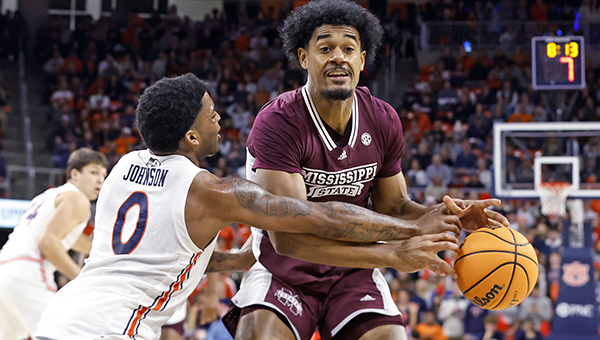 Auburn guard K.D. Johnson (0) knocks the ball away from Mississippi State's Tolu Smith (1) during the first half of Saturday's game. (AP Photo/Butch Dill)

Williams scored 11 of Auburn’s first 13 points, which included three 3-pointers in the opening six minutes of the game. The senior forward hit two more 3-pointers in a span of 1:27 early in the second half.

“I thought that was one of the best games I’ve seen (Williams) play,” Auburn head coach Bruce Pearl said. “Everyone’s going to point to the five 3s. But it was as hard and as physical as I’ve ever seen him play.”

Auburn led by as many as 13 points in the second half, but Mississippi State cut the lead to four with 2:34 remaining. Green then hit a deep 3-pointer before coming away with a steal and a layup on the following possession.

Mississippi State (12-5, 1-4) was led by the inside presence of fifth-year senior Tolu Smith, who had 20 points and 10 rebounds. Senior forward D.J. Jeffries added 12 points and eight rebounds. The Bulldogs have lost five of their last six games since winning their first 11 of the season.

But the Bulldogs missed all 18 of their attempts from 3-point range, while the host Tigers hit a season-high 11 3-pointers in the win. It was a familiar feeling for Mississippi State, which didn’t hit a single 3-pointer in its loss to Auburn last March.

“I’m not sure many college basketball games have been won when you’re 0-for-18 from the 3-point line, especially on the road,” Mississippi State coach Chris Jans said. “But I thought we took really good shots. … we just didn’t knock them down. I hate to say this, but (missing) just becomes contagious.”

The Bulldogs boast one of the toughest defenses in the country, but offense has been a major problem recently. Mississippi State has not scored 70 or more points in a game since Dec. 3, a streak that is nine games long.

“I think we lost the game in the first half, to be honest with you,” Jans said. “I felt like we just had so many empty possessions. Two assists and 13 turnovers (in the first half) isn’t a good recipe to win on the road.”

After neither team attempted a single free throw in the first half Saturday, the Bulldogs and the Tigers combined for 41 attempts from the line in the second half. Mississippi State was 21-for-28, after shooting just 31.8 percent from the line in a loss to Georgia on Wednesday. Auburn went 10-for-13.

“I don’t think I’ve ever been a part of a game like that,” Pearl said.