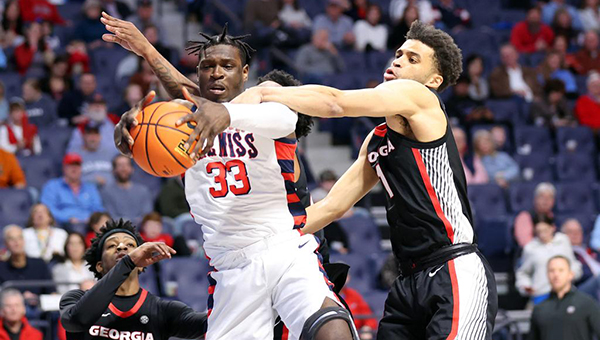 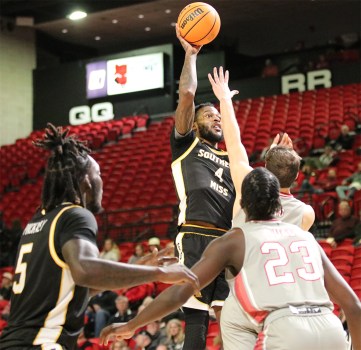 Southern Miss' Denijay Harris (4) shoots over an Arkansas State defender on Saturday. Harris finished with 22 points and eight rebounds to lead the Golden Eagles to a 75-57 victory. (Southern Miss Athletics)

OXFORD — Kario Oquendo scored all 15 of his points in the second half, and his 10 straight points in the final four minutes carried Georgia to a 62-58 men’s basketball win over Ole Miss on Saturday.

The win came in first-year Georgia coach Mike White’s first trip to Oxford, where he was a four-year starter for the Rebels.

Oquendo’s first points came on a 3-pointer four minutes into the second half, but his offense really came alive in the final six minutes, starting with a dunk and a layup to keep the Bulldogs within two. He knocked down a 3 to give Georgia a 57-56 lead with 2:20 left and another with 1:04 left to make it 60-56. His two free throws with three seconds left put the game out of reach.

Matthew Murrell dribbled the length of the floor and scored at the basket with 42 seconds left to get Ole Miss within two, but Georgia was able to run the shot clock down before Terry Roberts launched a 3-point attempt that caromed off the rim for Braelen Bridges to corral to maintain possession.

Oquendo snared a long in-bounds pass in the backcourt and drew an immediate foul before hitting both free throws with 3 seconds left to seal the victory and hand Ole Miss (8-9, 0-5 SEC) its fifth straight loss to open conference play. Ole Miss plays at South Carolina on Tuesday.

Harris had eight rebounds for the Golden Eagles. Austin Crowley scored 18 points, and DeAndre Pinckney had 12. Felipe Haase had 10 points and eight rebounds.

Haase hit two free throws 10 seconds into the second half to snap a 33-all tie and start a 23-3 run that effectively decided the game. Pinckney’s 3-pointer with 13:13 remaining put the Golden Eagles ahead 56-36. The lead eventually swelled to as many as 25 points.

Southern Miss shot 54 percent from the field in the second half and finished the game at a 47.4 percent clip. The Golden Eagles also pulled down 40 rebounds to Arkansas State’s 28.

Alcorn State 79, Texas Southern 74, OT
Dominic Brewton hit a game-tying 3-pointer as time expired in regulation, and then Alcorn State outscored Texas Southern 8-1 over the last 2 1/2 minutes of overtime to win its third game in a row.

A jumper by Dontrell McQuarter started Alcorn’s game-ending run in overtime, and a free throw by Byron Joshua with 1:51 remaining put the Braves ahead for good, 74-73. Texas Southern (4-14, 0-5 SWAC) missed its last five shots from the field.

Texas Southern had taken a 68-65 lead on a layup by Chris Craig with 4 seconds left in regulation. Brewton, who finished with a game-high 26 points, tied it with his 3-pointer at the buzzer, however.

Keondre Montgomery added 14 points for Alcorn State (6-10, 3-1) — including two 3-pointers in overtime — and Joshua had 12 points. McQuarter and Jeremiah Kendall both finished with eight points and eight rebounds.

Ken Evans was Jackson State’s only player to score in double figures. He finished with 14 points.

Prairie View led 26-14 at halftime, but Jackson State clawed its way back into the game tied it at 48 on a layup by Romelle Mansel with 4:07 remaining. Augustin put Prairie View back in front with a 3-pointer with three minutes to go, and the Panthers pulled away from there as Jackson State missed its last five shots from the field.

Union went on a 20-5 run and led by as many as 25 points following a jumper by Jeremiah Littlepage with 12:33 left in the game. Littlepage finished with 12 points.

Christian Brothers (3-14, 3-10 GSC) went on a 10-0 run late in the second half to pull to within 69-68 on a free throw by Aiden Ruthsatz with 1:09 remaining. Allen’s basket came following a missed 3-pointer, and Delta State closed things out by scoring the last six points of the game.

Maalik Cartwright dropped in a career-high 45 points on 19-for-28 shooting to lead the Statesmen to their fifth win in six games. Cartwright’s previous career high was 29 points.

In addition to its sharp free throw shooting, Belhaven was 32-for-49 (65.3 percent) shooting from the field and 9-for-13 from 3-point range.