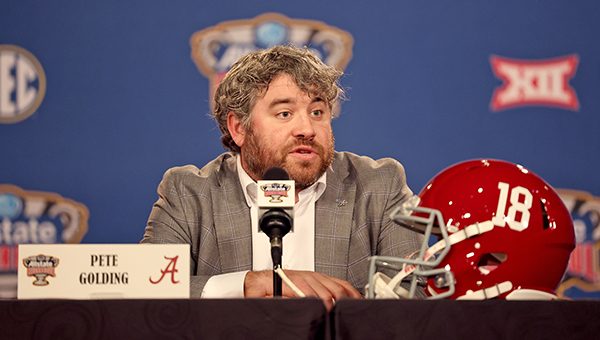 Ole Miss coach Lane Kiffin announced the hiring on Saturday of Golding, who had been the Crimson Tide’s defensive coordinator since 2018. The 38-year-old joins Kiffin, himself a former offensive coordinator under Nick Saban in Tuscaloosa, and remains in the Southeastern Conference Western Division.

“We are excited to add a championship caliber coach like Pete Golding to our staff,” Kiffin said. “At multiple stops in his career, coach Golding has directed some of college football’s top defenses. He is also an outstanding recruiter and understands the level of talent necessary to compete at the highest level.

“I think this continues to show our commitment to taking Ole Miss football to the next level.”

Golding helped guide the Tide to a national championship after the 2020 season and to an appearance in the title game a year later. Alabama failed to make the College Football Playoff this season after losing two games on the final play.

Golding had just over a year left on a three-year deal signed in March 2021 worth an average of $1.6 million per year, including $100,000 annual raises and a $125,000 longevity bonus each year. Defensive backs coach Charles Kelly had already left to become Deion Sanders’ defensive coordinator at Colorado.

Alabama ranked in the top 20 nationally in scoring defense in each of Golding’s five seasons with the program and in the top 10 four times.

The Tide ranked ninth in scoring defense and 13th in total defense last season. Linebacker Will Anderson Jr. repeated as the Bronko Nagurski Trophy winner and as a unanimous All-American.