Sports column: Like Hamlin, Vicksburg’s Martin is a medical miracle 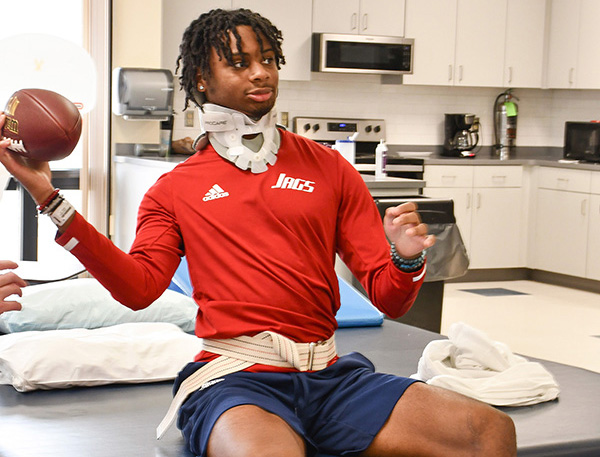 Over the past two weeks, the sports world has gotten to know — and, thankfully, marvel at — the story of Damar Hamlin.

The 24-year-old safety was a rising star for the NFL’s Buffalo Bills until he made a routine tackle during a game against Cincinnati on Jan. 2.

Hamlin’s heart stopped following a collision with receiver Tee Higgins. He collapsed and had to be resuscitated on the field. Amazingly, 10 days later he walked out of the hospital on his own.

Of all the things we see happen on a football field each season, it was the one we never want to witness.

Unfortunately, it was something Vicksburg football fans had already seen once before during the 2022 season. On Oct. 25, South Alabama defensive back and Vicksburg native Marvin Martin suffered a serious neck injury during practice.

Like Hamlin, by all accounts Martin’s injury happened on a routine play. He was trying to make a tackle and simply made contact the wrong way. He injured two vertebrae and couldn’t move. He was taken off the field in an ambulance.

Martin started to regain some feeling in his legs shortly after the injury, but had little movement or strength in his upper body. According to the National Center for Catastrophic Sport Injury Research’s data for 2021, three out of five football players with injuries like Martin’s do not recover.

Martin, though, does seem to be on the road to recovery. Two months after his injury he was able to walk out of Methodist Rehabilitation Center in Jackson under his own power.

Martin’s story, like Hamlin’s, is a remarkable one. In a short time both players went from suffering life-threatening injuries to still having a long life ahead of them. All of the first responders, doctors and physical therapists who worked with them deserve a round of applause and thank yous.

The biggest difference between Martin and Hamlin is what lays ahead in the months and years to come.
Although he was an NFL player, Hamlin was hardly set for life. As a sixth-round draft pick in his second season he hadn’t yet cashed in with a big contract. Still, if the Bills have any sort of heart or business sense, he should have some sort of job for life within the organization.

Martin, on the other hand, is only a college sophomore. He hopefully will have the opportunity to stay on some sort of scholarship at South Alabama until he earns his degree, but will have plenty of challenges ahead.

Martin is entering one of the most difficult phases of recovery from a catastrophic injury like this — the one where people’s memories and emotions start to fade.

Martin will make the adjustment to “normal life” that all high-level athletes do eventually, but he’ll also have to do it while dealing with health issues and medical bills.

A GoFundMe account was set up to help him and has raised more than $18,000. It will certainly help, but the last donation came in nearly two weeks ago.

As Martin continues his recovery, he’ll need some more help. There are plenty of things that insurance doesn’t cover, and plenty of other items that an injury like his requires. Thoughts and prayers always help, but a few bucks here and there go a long way as well. If you have some to spare, throw it his way.

While the entire world has rallied around Damar Hamlin, MJ Martin could also use some help and support.