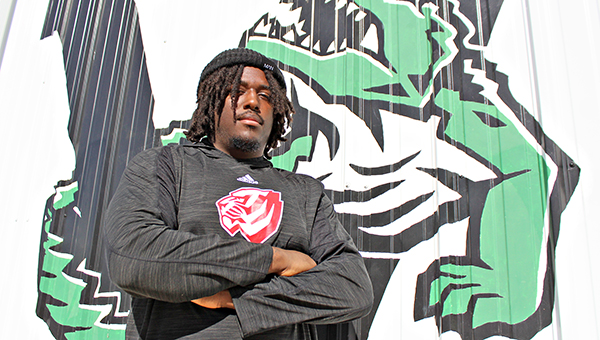 West Alabama offensive lineman Kordell Watts, a former Vicksburg High standout, will play in the Dream Bowl in Texas on Jan. 22. He is hoping to use the college all-star game to draw the attention of NFL scouts. (Ernest Bowker/The Vicksburg Post) 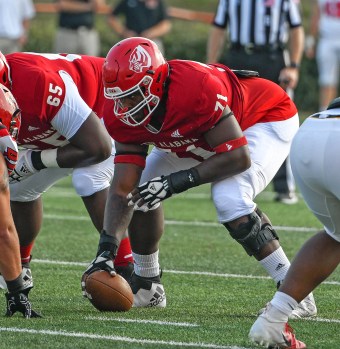 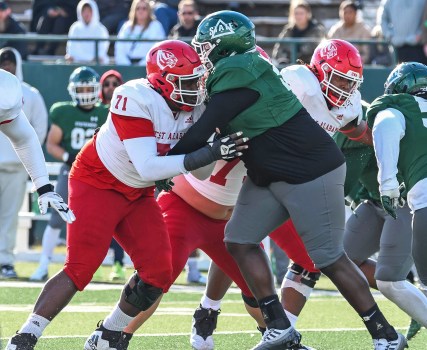 Kordell Watts has a dream of playing professional football. He’s hoping the Dream Bowl can help make it come true.

Watts, a former Vicksburg High star, will participate in the Dream Bowl all-star game Jan. 22 in the Dallas suburb of Little Elm, Texas. After finishing a standout career at West Alabama, he’s hoping to catch the eye of NFL and Canadian Football League scouts who are on the lookout for talent ahead of their respective leagues’ drafts this spring.

“When you come from the smaller schools you take what you can get. All I really need is that one person. It’s like dating — I just need somebody to like me and take me out,” Watts said with a laugh.

Taking the long and winding road to the next level is nothing new for Watts. His only firm scholarship offer coming out of high school was to Jones College, and it took him until his second season there to break out as a star.

Watts moved from guard to center for the 2018 season with Jones and helped the Bobcats average 171.3 rushing yards per game. They finished as the Mississippi Association of Community Colleges Conference runner-up and ranked No. 5 in the country.

“I was 6-2, 260, so I tried inside at guard for one year and then my sophomore year at Jones they said we need a center,” Watts said. “They asked me if I could snap. I had never snapped in my life, but it turned out pretty good.”

Watts added that sampling all three offensive line positions — he played tackle in high school, and guard and center in college — was an asset on his resume. It gives the 6-foot-3, 310-pounder an extra bit of versatility that might help him catch the eye of scouts.

Watts signed with Tennessee-Martin in December 2018, but only went through spring practice there before transferring to Division II West Alabama. He worked his way into the starting lineup over the course of two seasons at UWA, then never left it in his last two. He started at center in 20 of the Tigers’ last 22 games — he missed two in 2022 because of injury — and became a foundational part of the offensive line.

In 2022, Watts led West Alabama’s linemen with 24 pancake blocks. He was also named to the Gulf South Conference’s All-Academic team.

“I really took pride in that and my guys cheered me on when I put somebody on their back,” Watts said.

After finishing his college career, Watts started looking at what comes next. A former West Alabama teammate, Ricky Chatman, played in the Dream Bowl in 2022 and suggested Watts as a candidate to the game’s organizers.

The Dream Bowl, which is in its 11th year, is an all-star game designed primarily to give FCS, Division II and Division III players, as well as those from smaller FBS programs, a showcase for pro scouts. The game advertises itself as having about 30 scouts in attendance on game day.

Although there are obviously no guarantees that playing in the Dream Bowl will lead to being a draft pick or signing a free agent deal with an NFL team, Watts said any chance to play in front of scouts was an opportunity worth pursuing.

“This is an opportunity for me to get another game, my last college game really, and also to get some more eyes on me to get to the NFL,” Watts said. “My teammate said he got a lot of connections out of it. He talked to a lot of scouts, so I said I might as well go. It won’t hurt to talk to more scouts.”

Watts is trying to walk the same path as another NFL longshot from Vicksburg. Like Watts, cornerback Malcolm Butler also played at Vicksburg High and West Alabama and made it to the NFL as an unheralded, undrafted free agent.

Butler famously went on to have a seven-year NFL career that included two Super Bowl championships with the New England Patriots, and one of the biggest plays in Super Bowl history with his game-clinching interception in Super Bowl XLIX against Seattle.

Watts said he’s talked with Butler and gotten some advice about what’s ahead.

“I knew Malcolm went to West Alabama, but I didn’t know it was a big deal. I got there and saw his name all over the place,” Watts laughed. “When I got to talk to him he gave me some pointers. He told me to just keep my head down and keep working. When you hear a guy like that who’s been all over the place that you can make it to the league, you might as well try.”

Taking his best shot at playing professionally is really what the next few months are about for Watts. Whether it’s the NFL or CFL, or even the USFL and revamped XFL spring leagues, he’s hopeful that the Dream Bowl can showcase his talents to somebody, somewhere, who will give him his shot.

“I know with how I played this year there’s going to be somebody out there who says, ‘This kid can play.’ Everybody can talk, but the proof is in the film,” Watts said. “So I just want to go out there, have fun at the bowl game, enjoy my last college game, meet some new guys and some scouts and just have fun with it. See where I land.”