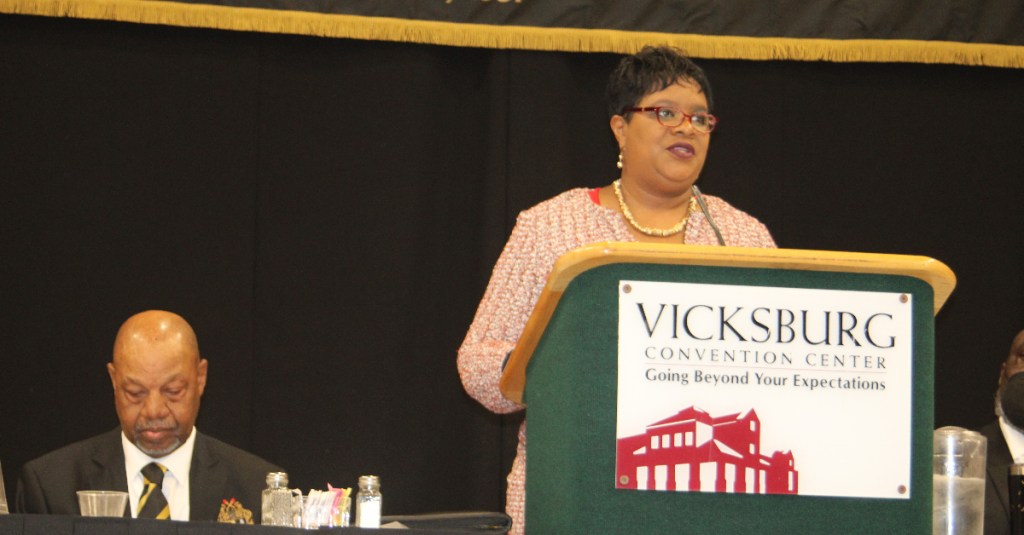 “Today here in Vicksburg and across the country, we take this opportunity to celebrate Dr. King’s legacy of service and be inspired to live out his dream in our home, in the community, and throughout the world,” said Alcorn President Felicia M. Nave.

“In 2023, our state and the nation continue to grapple with the issues of race and it moves us to honor and remember Dr. King, who did so much to promote equality and opportunity, social justice and respect for human beings,” she said. “In his short 39 years, his dedicated service to ensure the right to vote for all, ending segregation, life rights and civil rights should inspire all of us to continue the work that still remains even today.”

King, Nave said, was not afraid to fight for what he believed in, “But my question to you is, are you?”

Drawing from King’s comments that “an individual has not started living until he can rise above the narrow confines of his individualistic concerns to the broader concerns of all humanity,” she said people should spend the day honoring King by reflecting on how they can advance the values he stood for in their lives and in the community that they serve.

“Reflect on his legacy in the area of youth development,” Nave said. “The civil rights movement was a youth movement and young people were at the forefront of everything that happened and often were its greatest victims.

“Dr. King dedicated his life to engaging and empowering young people to be instruments of change,” she added, pointing out that King worked with the Student Non-violent Coordinating Committee to desegregate public buildings combat race and empower African-Americans across the country.

“Martin Luther King Jr. was aware that without youth engagement achievement in civil rights would be impossible,” she said. “You are never too young to get involved, champion a cause and start a movement. No matter our conviction, our differences, whether it be age, gender, race, nationality or sexual orientation we must remember that we can do something about injustice.

Nave urged people to invest in youth and find ways to get and keep them engaged and motivated “because they are our future.”

And making that investment requires more than money, she said.

“We must also dedicate time and attention to people who need it the most because one life can change a generation. We cannot allow young people to fall through the cracks,” Nave said, adding adults need to provide young people with the resources and support they need to become successful in school and in life.

“We all lead by example and we’re going to continue to provide a positive example to future generations… get involved, encourage and advise,” she said.

“You never know when the opportunity to change a young person may come,” Nave said. “When it does, will you be in a position to provide them with the guidance, inspiration and tools and resources they need to succeed?”

King’s legacy, she said, requires people to serve and do their part and help shape the future of youth and open the possibilities of success for them.

“Let’s honor our heritage by working our present and re-evaluating our future,” she said.