Vote now in The Post’s Athlete of the Week contest 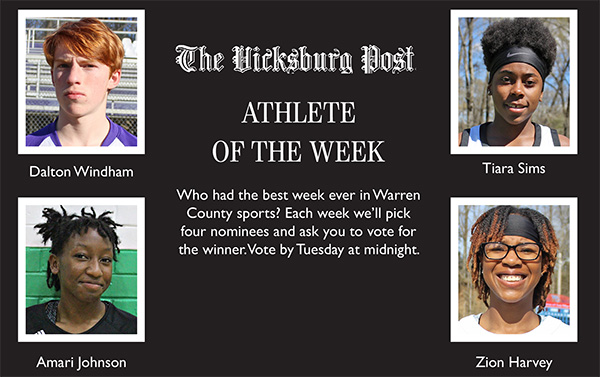 Voting is under way for The Vicksburg Post’s Athlete of the Week contest!

Windham, a sophomore for St. Aloysius’ boys’ soccer team, scored the game-winning goal in a 1-0 victory against East Rankin Academy on Jan. 9.

Johnson, a freshman girls’ soccer player for Vicksburg High, had four goals and one assist in a 7-0 victory against Greenville on Jan. 10 that clinched the team’s fourth consecutive MHSAA Region 3-5A championship.

Sims, a senior for Porter’s Chapel Academy’s girls’ basketball team, averaged 29.5 points and 3.3 steals as the Lady Eagles won all four of their games this week.

Harvey, a sophomore guard with Warren Central’s girls’ basketball team, had 19 points and six steals in a 52-38 victory against Terry on Jan. 13.

Voting is open at this link until midnight Tuesday; you can vote more than once; and you can vote once per hour until the deadline.