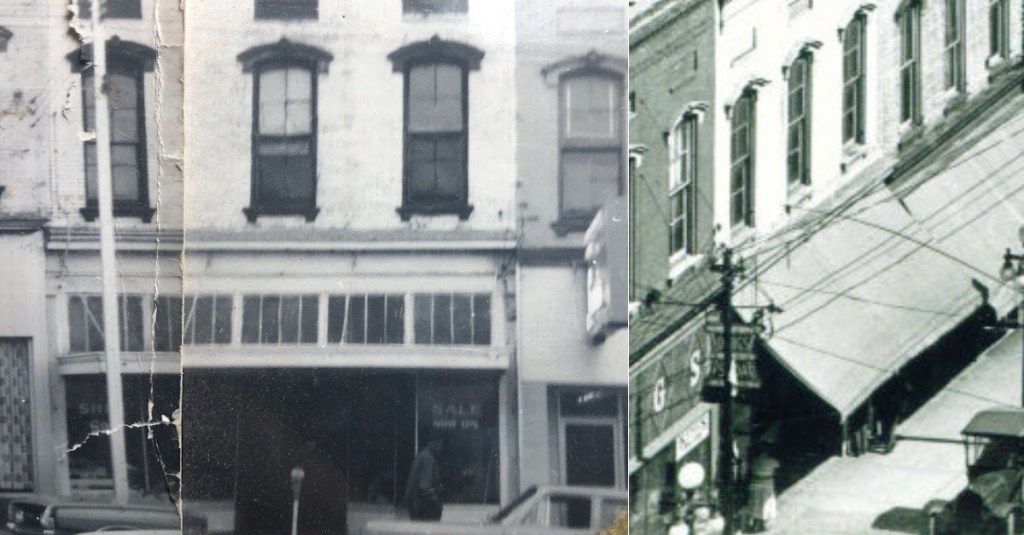 This commercial building at 1204 Washington St. was located on the west side of Washington Street, between China and Clay streets, and was most likely built just after the Civil War.

In January of 1869, it was the store of Kern and Company Dry Goods while they were building a new location, and Miss Martin’s Millinery Shop. By May of the same year, Drs. C.S. Knapp and J.B. Askew operated their dental surgery above Miss Martin and by 1870, Askew had been replaced by Dr. T.D. French.

The first floor was the store of Ruhman and Company, which sold European goods. From this time until about 1877, the building was home to a number of businesses including Rufus Arnold, who moved from Jackson to open a watch and jewelry store, and Wheeler and Wilson sewing machines.

In August of 1877, Miles and McRae Druggists were selling not only drugs but wines and liquors out of the building. Mary Martin continued to sell hats and bonnets in the building as well. In 1878, Dr. R.A. Quin and Dr. S.D. Robbins had their offices on the second floor. In 1881, the drugstore was owned solely by McRae.

The Vicksburg Herald reported in September of that year that “Among those young men who have commenced business in Vicksburg, and by affable manners and square dealing have won success in their chosen avocations, we desire to mention Mr. Fulton M. McRae, wholesale and retail druggist, and dealer in White Lead, Linseed Oil, Turpentine, painters’ material, Window Glass, etc. A casual glance through all the various departments of this immense house, up and down stairs, and in the garret, has satisfied us that Fulton M. McRae carries the largest and best-assorted stock of any merchant in the same line of business in the city.

“Fult., as he is familiarly called, has been compounding ad selling drugs ever since he was knee-high to a duck, and during all that time he worked quietly and faithfully, so that now, by conducting his business in such a way as to give satisfaction to his customers, he has gradually and steadily gathered about him an extensive trade.”

In about 1918, King and Company moved one door to the south and Teller Dry Goods, managed by Samuel Teller, moved into the building. They were there as late as 1929 and then by 1935, W.G. Bodron and Company Grocers is listed there. There were several occupants over the next 40 years, including Consolidated Credit Corporation, until the building was demolished under Urban Renewal in the 1970s and a vacant lot remains today.