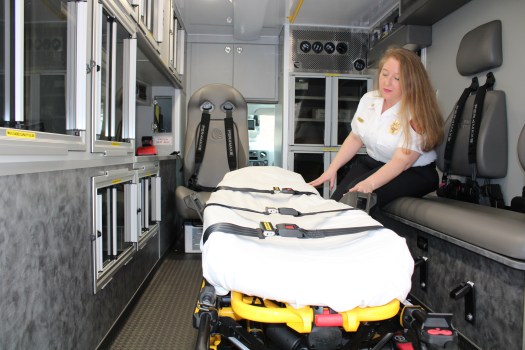 Deputy Fire Chief Jessica Cade examines a Stryker Power-LOAD stretcher, which uses a battery-powered hydraulic system to raise and lower the cot holding the patient when medics are either loading or unloading an ambulance, on one of the new Vicksburg Fire Department ambulances. (Photo by John Surratt | The Vicksburg Post) 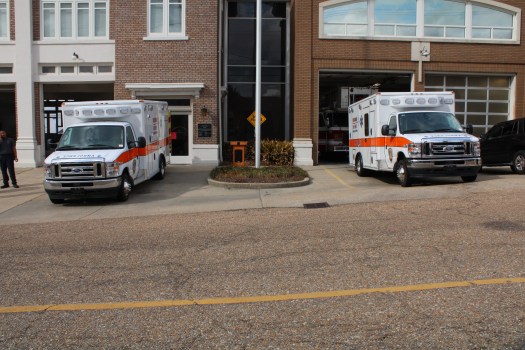 The Vicksburg Fire Department's new ambulances, Fire Medic 20 and Fire Medic 80, sit outside the Central Fire Station before being relocated at Station 2 and Station 8, respectively. (Photo by John Surratt | The Vicksburg Post)

The Vicksburg Fire Department upgraded its ambulance fleet Wednesday with the introduction of two new vehicles during a brief ceremony at the Central Fire Station.

“With this new addition we now have 10 ambulances with four ambulances staffed 24 hours a day, 365 days a year,” said Deputy Fire Chief Jessica Cade, adding the department will now have additional ambulances as needed “to ensure we can handle any emergency.”

Cade said the ambulances are the department’s first vehicles purchased in the post-COVID era.

“We’re very happy that they have arrived and are ready to be placed into service,” she said. “Fire Medic 20 will be stationed at Station 2 on Indiana Avenue and Fire Medic 80 will be at Station 8 near Halls Ferry Road.”

“We’re glad that these two units are coming online, we’re glad we have the personnel that knows how to operate these units and that they save so many lives here in Vicksburg and in Warren County,” Ward 1 Alderman Michael Mayfield said.

Calling the fire department “one of the best, if not the best” departments in the state, Mayfield said the Board of Mayor and Aldermen make sure firefighter and emergency medical responders get the training they need “so that they may take care of us as citizens of Vicksburg and Warren County.”

Prepared by Emergency Vehicle Services of Memphis, Tenn., the ambulances cost $207,633 each.

Each vehicle is equipped with a Stryker Power-LOAD stretcher, which uses a battery-powered hydraulic system to raise and lower the cot holding the patient when medics are either loading or unloading an ambulance.

“Now, all four of our frontline ambulances will have autoloaders, so not only are our stretchers power-loaded, but loading (a patient) into the ambulance is autoloaded so you put it in there and it does all the lifting for us,” Associate Fire Chief Trey Martin said.

He said the ambulances burn gasoline, not diesel like some of the earlier ambulances, citing problems with the diesel engines as the reason for the change.

Martin said the city just awarded a contract to re-truck two ambulances. The process involves installing a new chassis for the ambulance and refurbishing the ambulance’s “box,” which contains supplies, equipment and the stretcher.

“It will be like a new ambulance,” he said.

“We want to thank the Board of Mayor and Aldermen for their assistance in purchasing them,” Fire Chief Derrick Stamps said.