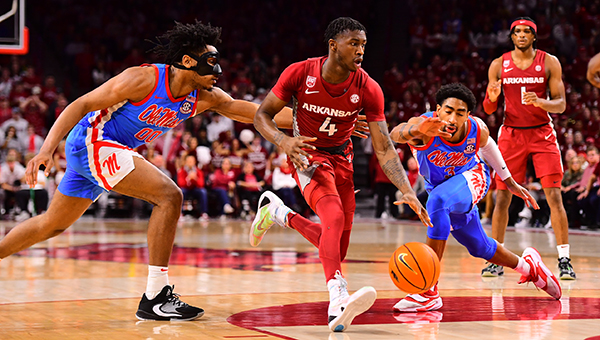 Only nine teams in Division I men’s basketball had made fewer 3-pointers than Arkansas (13-6, 2-5 Southeastern Conference) this season, but the Razorbacks tied a season high by making eight from beyond the arc. They led by as many as 21.

Pinion and Devo Davis each made three 3s. Davis had 16 points and Jordan Walsh finished with 13.

“From an offensive standpoint, there’s no doubt Joseph can help us and stretch the floor out,” Arkansas coach Eric Musselman said. “I give him a lot of credit for his confidence shooting the ball.”

Ole Miss (9-10, 1-6) committed 17 turnovers. The Rebels had six giveaways in the first six minutes of the second half, helping Arkansas extend its three-point halftime lead to 11 at the first media timeout after the break. Ole Miss shot 52 percent from the field in the first half, but only 37 percent (11-for-29) in the second.

“I thought our team was prepared to play. We had energy, ran good stuff, we just turned it over. Our guard play was not great today,” Ole Miss coach Kermit Davis said. “The second half, we couldn’t get anything going offensively. You’ve got to expect Arkansas is going to score some points and we couldn’t match scores or get any rhythm offensively. Just too many turnovers and not enough poise on the road.”

Two of the SEC’s leading scorers were non-factors. Arkansas’ Ricky Council, who entered second in the SEC at 18 points per game, had just two. Ole Miss’ Matthew Murrell, who was averaging 15.6 points, finished with three.

Jayveous McKinnis and Daeshun Ruffin each had 10 points for Ole Miss.

“I think our whole team really responded in the second half,” Musselman said. “I thought in the first half kind of weren’t making shots, but I thought the second half defensively, holding Ole Miss to 37 percent, doing what we do, which is creating offense through our defense.”

Ole Miss had snapped a five-game losing streak by beating South Carolina in its previous outing, but took a step back with this loss. It will return home Tuesday to play Missouri, and then goes back on the road to Oklahoma State next Saturday for the SEC-Big 12 challenge.

“It’s our fourth game in seven on the road. The league’s hard,” Davis said. “We’ve been very competitive in most of the games. Overall, it’s a lot of different things we can point to. Today was turnovers and guard play. We’ll keep preparing them. It’s on me. We’ve got to keep working with them and get them in better spots.”