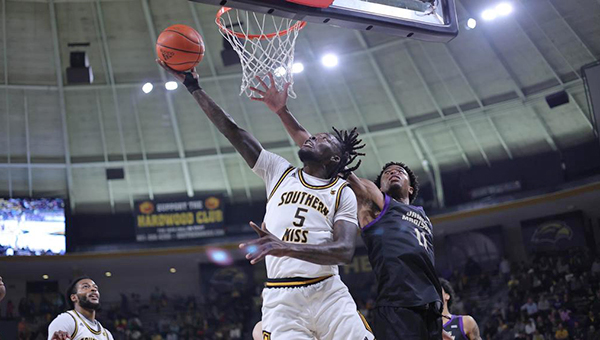 HATTIESBURG — Southern Miss had its best shooting night of the season and never trailed Saturday, as it blew out James Madison 83-70 at Reed Green Coliseum.

DeAndre Pinckney scored a career-high 28 points on 11-for-15 shooting for the Golden Eagles (17-4, 6-2 Sun Belt Conference). Austin Crowley was 5-for-6 from the field and finished with 14 points, while Denijay Harris added 10 points.

Southern Miss’ 23 assists were its most in a game this season. It also had 10 steals, the ninth time it has finished in double figures. Mo Arnold led the Golden Eagles with six assists, and three players had two steals each.

Southern Miss remained undefeated at home this season, improving to 10-0. Its next two games are also at Reed Green Coliseum, Tuesday vs. Arkansas State and next Saturday against Texas State.

Brewton was Alcorn’s only player to finish in double figures, but six had at least six points and nine players scored in all.

The Braves built a nine-point lead at halftime, and led by as many as 18. Florida A&M never got closer than seven in the second half.

Alcorn State won its fifth consecutive game. It will play at home again on Monday, at 7:30 p.m. against Bethune-Cookman.

Young went 10-for-10 from the free throw line, and the Tigers were 16-for-18 as a team. After Bethune-Cookman cut it to 68-66 on a 3-pointer by Dhashon Dyson with seven seconds left in the game, Young made two free throws with three seconds to go to seal it.

Bethune-Cookman was 5-for-25 from 3-point range. Zion Harmon led the Wildcats with 20 points, and Marcus Garrett had 15 points and sevenr ebounds.

Valdosta State 93, Delta State 44
Delta State went 4-for-35 from 3-point range and shot a miserable 25.8 percent (16-for-62) from the field overall, and was blown out by Valdosta State on Saturday.

Caden Boser and Maurice Gordon scored 15 points apiece for Valdosta State (14-8, 10-6 Gulf South Conference). The Blazers opened the game with a 14-0 run and never trailed. They went 14-for-35 from 3-point range.

Demond Franklin was the leading scorer for Delta State (6-13, 5-11), with just eight points. Derek Moore had seven points and 12 rebounds.

Covenant College 65, Belhaven 58
Jonathan Gernatt had 19 points and eight rebounds, and Covenant College (6-12, 2-3 Collegiate Conference of the South) held off a late comeback bid by Belhaven (9-7, 5-2) on Saturday.

Belhaven cut a 14-point second-half deficit to five, at 63-58 on a layup by Jordan Judah with 16 seconds remaining, but couldn’t get any closer.

Judah finished with 12 points and eight rebounds. Jordan Marshall led Belhaven with 16 points. The Blazers only shot three free throws in the game, making one. A combined total of only 21 fouls were called on both teams.

Belhaven will travel across the street in Jackson on Tuesday to play Millsaps in a non-conference game.