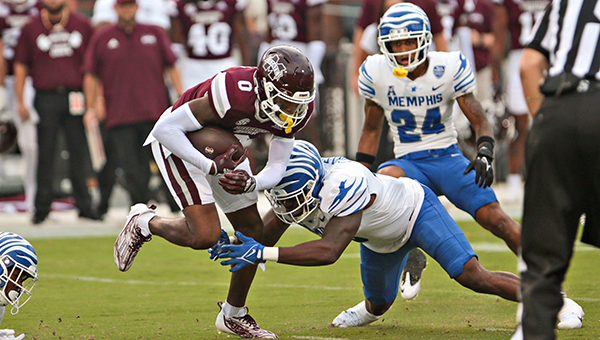 Mississippi State wide receiver Rara Thomas (0) takes a hit during a game against Memphis last season. Thomas transferred to Georgia in December, and on Monday he was arrested on a felony charge of false imprisonment. (Walter Frazier/For The Vicksburg Post)

Rodarius “Rara” Thomas was booked at around 4 a.m. on a felony charge of false imprisonment and a misdemeanor count of family violence battery, according to Clarke County jail records. He spent more than eight hours in jail before being released on $1,850 bond shortly after noon.

Jail records showed the 20-year-old Thomas was arrested by University of Georgia police. No other details were immediately available, and it was not known if Thomas had an attorney who could speak for him.

“We are aware of a reported incident involving conduct by one of our student-athletes,” the Georgia athletic department said in a statement. “While we are limited in what we can say about the incident, the report is disappointing and not reflective of the high standards we have for our student-athletes on and off the field.”

The arrest of Thomas was another blow to a Georgia team that won its second straight national championship with a 65-7 rout of TCU on Jan. 9.

A few hours after a celebratory parade through Athens and a ceremony at Sanford Stadium, offensive lineman Devin Willock and a member of the recruiting staff were killed in an early morning car wreck on Jan. 15. Excessive speed has been cited as one of the causes of the crash, which remains under investigation.

Thomas, who is from Eufaula, Alabama, was one of Mississippi State’s leading receivers this past season, with 44 catches for a team-high 626 yards and seven touchdowns.

He announced his transfer to Georgia in December.

Thomas has been projected to be a key member of Georgia’s offense after receiver Kearis Jackson declared for the NFL draft and receiver Adonai Adonai Mitchell entered the transfer portal.