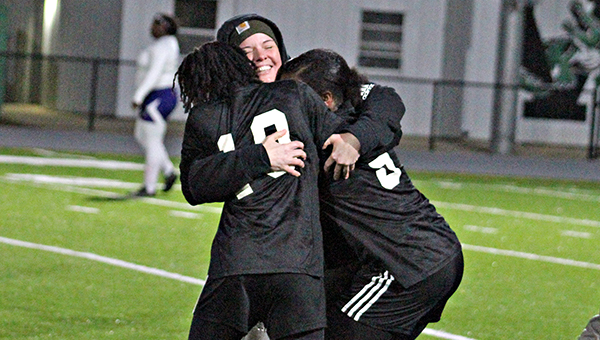 Vicksburg High soccer players Amari Johnson (10) and Trinity McGloster (9) celebrate with coach Samantha Bailey after beating Columbus 5-0 in the second round of the MHSAA Class 5A playoffs on Monday. It was Vicksburg's first playoff win since 2010. (Ernest Bowker/The Vicksburg Post) 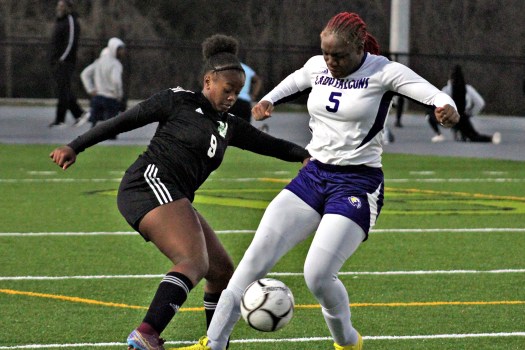 Vicksburg's Trinity McGloster (9) and Columbus' Caniyah Congious (5) battle for possession of the ball in the first half of Monday's MHSAA Class 5A girls' soccer playoff game at Memorial Stadium. Vicksburg won 5-0, for its first postseason victory since 2010. (Ernest Bowker/The Vicksburg Post) 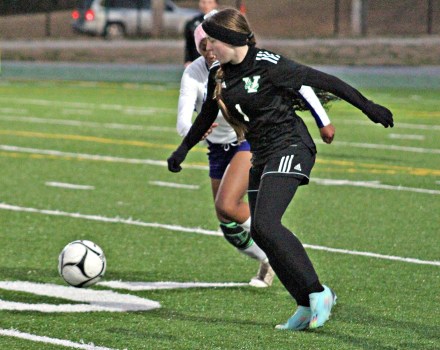 Vicksburg's Kennedy Mullins (1) dribbles the ball in the first half of an MHSAA Class 5A girls' soccer playoff game against Columbus on Monday. (Ernest Bowker/The Vicksburg Post) 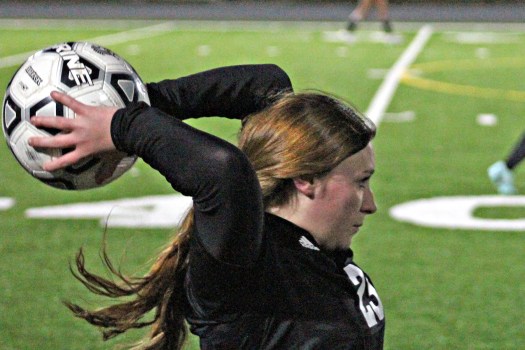 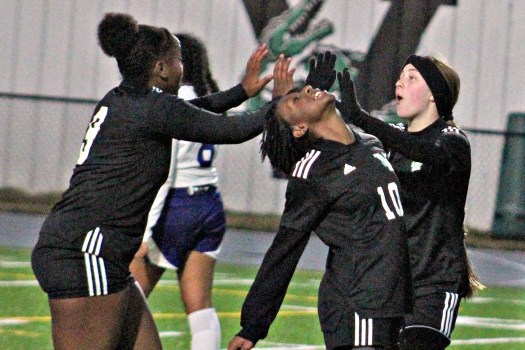 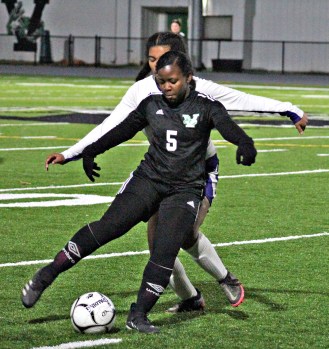 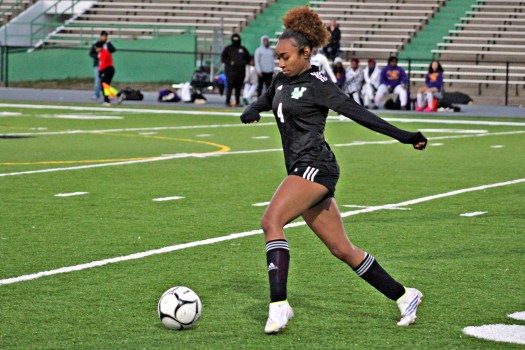 Vicksburg's Jamiyah Gaines (4) dribbles the ball in the first half of an MHSAA Class 5A girls' soccer playoff game against Columbus on Monday. Vicksburg won 5-0, for its first postseason victory since 2010. (Ernest Bowker/The Vicksburg Post)

For the first time in more than a decade, Vicksburg High is going swimming in the deep water of the MHSAA girls’ soccer playoffs.

Amari Johnson scored three goals, and Trinity McGloster had a goal and an assist, as the Missy Gators beat Columbus 5-0 in the second round of the Class 5A playoffs on Monday.

It is Vicksburg’s first postseason win since 2010.

“It feels amazing,” McGloster said. “Coming into the game, with how the season went with us being undefeated in district, I was like we’ve totally got this. All we have to do is keep our head in the game, and we did just that.”

The Missy Gators (9-4-2), who received a first-round bye for winning the Region 4-5A championship, advanced to the third round. They will host Saltillo on Saturday afternoon. The start time has not yet been set.

Saltillo (13-3) defeated Neshoba Central 5-0 in another second-round game on Monday. Saltillo also beat Vicksburg 7-0 in the 2022 playoffs, and Vicksburg coach Samantha Bailey was eager for a rematch.

“They came to us last year and we were beat before we walked on the field. This year, they’re not going to get that team,” Bailey said.

The Missy Gators proved that against Columbus. They had been outscored 34-0 in their previous five playoff games, but only needed 11 minutes Monday to score their first postseason goal since 2015.

McGloster saved the ball from going out of bounds along the left sideline. She dribbled around a defender and fed a nice cross to Johnson, who split two defenders in the middle of the field and sent a hard shot past Columbus keeper Aliyiah Richey for a 1-0 lead.

McGloster said scoring early was a huge mental boost for the Missy Gators.

“When we got that first goal in, we saw we could put the ball in the back of the net. And once we saw how we were passing and sequencing and everything, we got it,” she said.

Vicksburg added two more goals before halftime. Johnson scored again in the 23rd minute, on an odd shot that rolled slowly through the defense for 20 yards until it found its way into the right front corner of the net.

Midori Allen later roofed a shot off the underside of the crossbar in the 31st minute for a 3-0 lead at halftime.

“The first few exchanges of the ball, I thought we were getting a little too far on our end. I didn’t want to see that. But once we got that first goal they just got rolling,” Bailey said.

McGloster scored a goal of her own just after halftime, in the 43rd minute, and Johnson bookended it by completing her hat trick in the 73rd.

Columbus (8-8) made a push late in the game, and wound up with seven shots, but none got past VHS keeper Ava Pritchard. The Missy Gators dominated all night and achieved a major season goal by advancing to the third round.

“It feels good. That’s something we’ve been working on for three years now. This year, I knew coming into the summer that this was the year we could go past that. So now to be looking at the third round and have a seat, it feels pretty good,” Bailey said. “To get to here and win tonight, that was their overall goal this year — make it past the second round. And they did that tonight.”