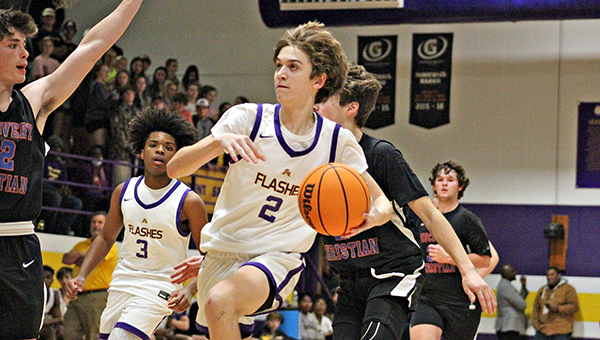 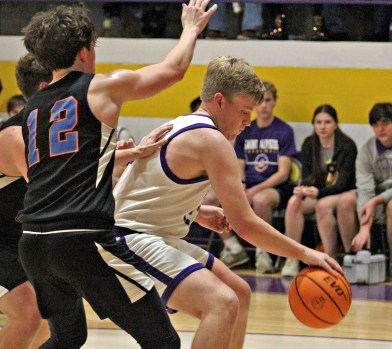 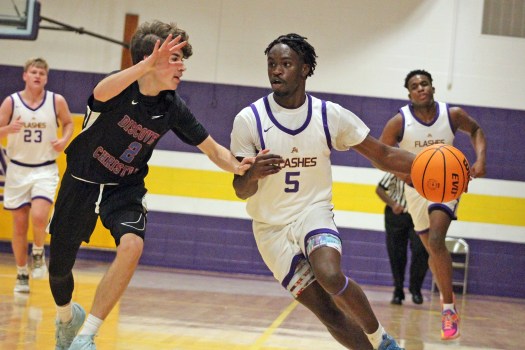 St. Aloysius' Ahmad Stewart (5) brings the ball up the floor against Discovery Christian's Spencer Lercil (2) in the first half of Monday's game. (Ernest Bowker/The Vicksburg Post) 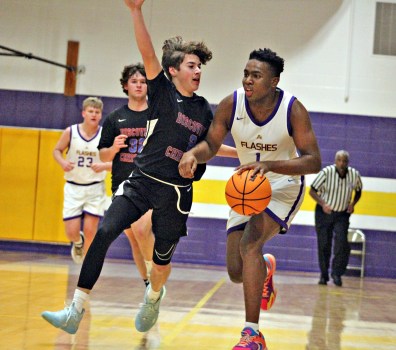 St. Aloysius' Korey Simms (1) brings the ball up the floor against Discovery Christian's Spencer Lercil (2) in the first half of Monday's game. (Ernest Bowker/The Vicksburg Post) 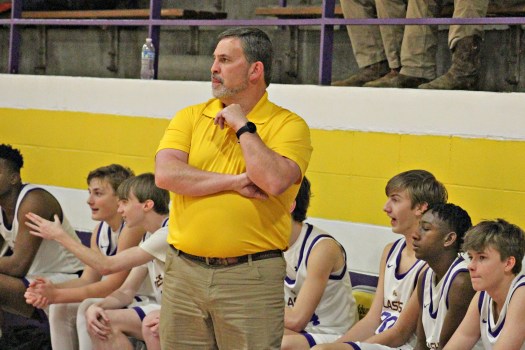 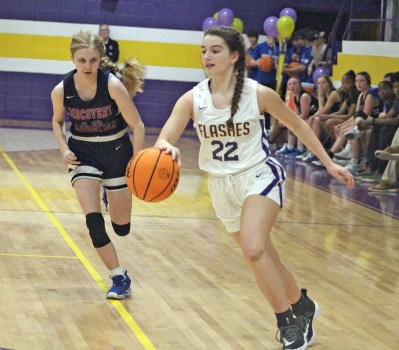 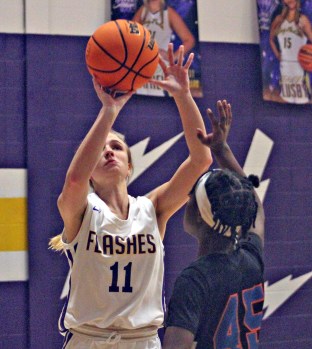 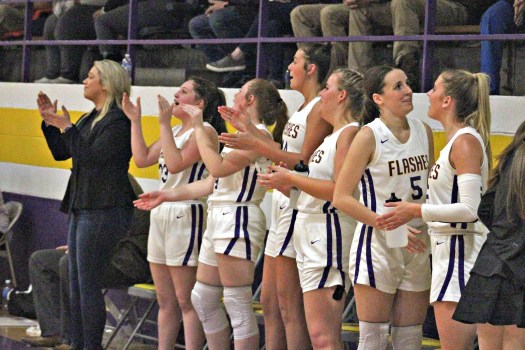 The St. Aloysius Lady Flashes cheer on their teammates near the end of a 55-2 victory against Discovery Christian on Monday. (Ernest Bowker/The Vicksburg Post)

It was gritty and it wasn’t pretty, but it was a win — and near the end of a difficult season, the St. Aloysius Flashes were not about to complain how it looked.

Anthony McCloud and Carson Gleese combined for 15 of St. Al’s 27 points in the second half, and the Flashes surged past Discovery Christian 43-34 in the boys’ half of Monday’s basketball doubleheader.

“It feels great. The team has been down lately and wins have been hard,” said St. Al senior Will Keen, who finished with eight points. “To come out, especially on senior night — and not just for myself, but for Ahmad (Stewart) and Justin (Glass) — it just feels good to get this win. Just boost morale a little bit coming into this last week of the season.”

McCloud finished with a team-high 10 points, including nine in the second half. Gleese scored all six of his points in the fourth quarter, and Ahmad Stewart and Carson Henderson scored eight points apiece.

St. Al struggled with its shooting all night. It trailed 21-16 at halftime and didn’t get rolling until late in the third quarter. Baskets by Keen and Stewart in the final minute sent the Flashes into the fourth quarter with a 33-29 lead, and they locked down Discovery Christian down the stretch.

“It was tough. I think we underestimated them a little bit, because this was one of our few wins,” Keen said. “And with senior night it made it a little more fun. We just made it harder on ourselves than it should have been.”

Discovery only scored five points in the fourth quarter. Press-breaking layups by McCloud and Gleese in the final minute of the game allowed the Flashes to finally pull away.

“It just took us a while to get on them. If they’d have played the whole game like they did the third and fourth quarter we’d have won easy. It made it hard on us,” new St. Al coach Walter Hallberg said.

Hallberg won his first game since taking over as St. Al’s coach two weeks ago. Kim Windom coached the team for most of the season, but stepped down on Jan. 14.

St. Al athletic director Bubba Nettles said the plan was always for Windom to serve in the role as head coach on a temporary basis until a full-time replacement could be found. Hallberg, who coached Porter’s Chapel Academy to the MAIS Class 3A semifinals last season, will finish this season and be the head coach moving forward.

“Coach Kim Windom was here temporarily until we were able to find our permanent replacement. Once that happened, he graciously offered to step aside and let Coach Hallberg begin his journey,” Nettles said. “Coach Windom helped us out when we needed it the most and we are extremely grateful for his contributions. We wish him nothing but the best as he gets to enjoy his well-earned retirement.”

Hallberg said he was excited to work with his new team. St. Al has two regular-season games remaining — Tuesday at home vs. Adams County Christian, and Thursday at Copiah Academy — as well as the MAIS District 3-5A tournament that begins on Feb. 4.

“I can’t wait to get a full summer in with these young men and start preparing for the future. We have tons of young talent and the future is very bright here at St. Al,” Hallberg said. “I want to thank my family for always being behind me and supporting me in anything I do. Lastly and most importantly, I want to thank my wife Laura Hallberg for being by my side and wanting to be a coach’s wife again. It’s not an easy job.”

Molly Mayfield had Discovery Christian’s only basket, in the second quarter. St. Al led 19-0 at the end of the first quarter and 33-2 at halftime.