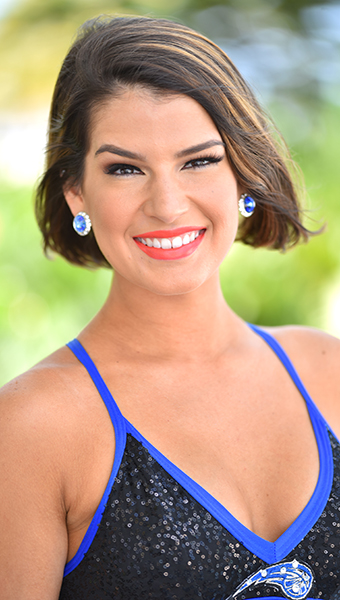 For Vicksburg native Molleigh Wallace achieving her dream of being a professional dancer has exceeded her expectations.

Wallace found out about the audition through word of mouth. She had friends already going to the audition and they talked her in to trying out.

“The process was pretty difficult. They had a boot camp week with 90 girls and later in the week they had the actual audition,” Wallace said.

The audition consisted of multiple cuts, dance routines and a sponsored trip to the Bahamas.

The girls went through an across the floor combination and the first cuts were made. Then the group of girls learned a jazz and hip-hop combination routine before a cut to the final 30 was made.

Baha Mar, the official sponsor of the Orland Magic, flew the girls to the Bahamas where the heat of the auditions picked up. The group shot a swimsuit calendar, instructed dance classes, participated in community events and learned the final routines for the audition.

“Auditions were open to the public and streamed live,” Wallace said.

The new team was announced and consists of 20 dancers. Wallace is excited be working for an organization like the Magic and said the fans have a really good connection with everyone in the organization.

Wallace danced for the Orlando Predators of the Arena Football League before auditioning for the Magic. She also danced for Royal Caribbean Cruises and spent three years in Europe, Universal Studios and Walt Disney World Resort in Orlando and on the infamous strip of Las Vegas.

She really enjoys dancing and has fun doing it and couldn’t ask for anything else. For her it’s a great stress reliever and a great way to stay in shape.

Wallace is from a family with an art and dance background. She is the daughter of Debra Franco, who owns a dance studio in Vicksburg and her father is into theatre. Franco said Wallace is a well-rounded dancer and has been dancing since the age of three.

“She’s always wanted to dance but I don’t think we ever really discussed it,” Franco said. “She just assumed she would dance.”

Wallace began doing competitions at the age of eight and when competing, Franco made her daughter do a ballet solo and a lyrical piece, she would win top honors for her performance.

“When you see her do the lyrical and jazz, you’d see much more of the passion, life and enjoyment of it. It’s really her field,” Franco said.

Every summer in high school Wallace attended a camp in Los Angeles. One part of the camp taught dancers how to audition and when she turned 16 she auditioned for Royal Caribbean Cruise Lines and was hired when she was 17-years-old.

Wallace was on dance teams in high school and college and said the teams helped her prepare for bigger auditions. She had great instructors and it helped her know what to expect moving forward in this career.

Franco and Wallace are excited for the new path of being a professional NBA dancer and they both believe it is a wonderful opportunity.

“I’ve been a professional dancers for a few years and it’s still surreal that I can achieve many goals,” Wallace said. “I’ve been very fortunate and I hope it opens many more doors for me.”